WARNING: This article is for those who have seen Blade Runner 2049 and contains major spoilers – click away now if you do not want to find out what happens in the film.

Blade Runner 2049, released last year, is an apocalyptic vision of technology. The science fiction film is the sequel to Ridley Scott’s 1982 classic, and imagines a dystopian and pessimistic world populated by humans and “replicants” – biologically engineered or “designed” humans who are used as slaves.

The sequel was directed by Denis Villeneuve, and is set in Los Angeles, US. It centres around a character called “K”, played by Ryan Gosling; a surprisingly sensitive and emotionally-aware replicant who discovers in the film that his man-made “species” are able to give birth to children.

The film sees a struggle ensue between the Los Angeles Police Department, which wants to stifle this truth, and Wallace Corporation, the company who manufactures replicants, which wants to discover the secret to reproducing bio-engineered humans. It poses questions about power struggles between people, what it means to be human, and the conflicting possibilities and dangers of advancing technology. 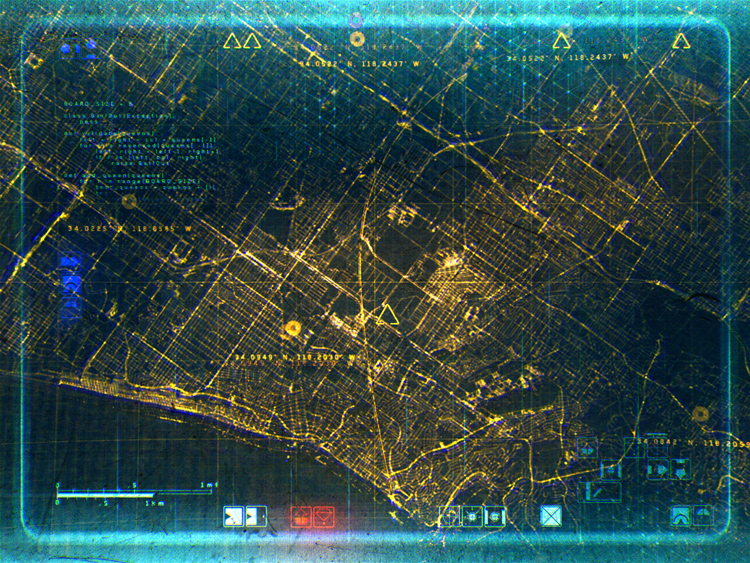 Set against a brutal and bleak, high-rise landscape, society in Los Angeles in 2049 is depicted as sexually sordid, dirty, morally corrupt and ruthless. The film was shot in Budapest, Hungary.

Design studio Territory was commissioned in 2016 by the film’s art director Paul Inglis to create the graphic elements of the film. It was a feat that would be completed by a team of six people in just four months, and would require a lot of imagination to design an entire fantasy world.

The design team were flown to Budapest and give two hours to read the entire, top-secret script, and were not permitted to take notes.

“In some ways, it meant we didn’t get caught up in the details too much,” says David Sheldon-Hicks, executive creative director at Territory, speaking at this year’s Design and Art Direction (D&AD) Festival. “It was more about emotional impact, and that’s what we responded to when we were designing.”

Territory worked with production designer Dennis Gassner on the film, who summed up his vision in three words: brutality, scale and power. 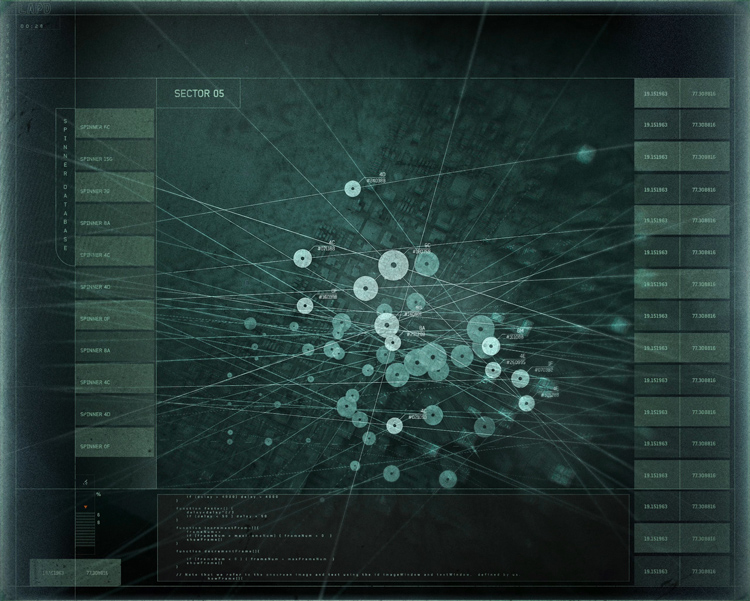 The design studio’s remit was to create in-film digital systems and user interface graphics, such as in-car displays and retina eye scans. The team designed over 100 assets in total across 15 sets, the majority of which were created physically and then enhanced through computer-generated imagery (CGI).

There were a few failed first attempts, says Sheldon-Hicks. “Some bits got a little bit too sci-fi for the director, then other bits went too Marvel – too techy with the wrong colour palettes,” he says. “There is a real issue with the sci-fi genre in that it comes with its stereotypes – blue, for example.”

To make the film’s graphic design original, Gassner and Territory decided to “step away from the computer” when creating, and make things that were tangible, Sheldon-Hicks says. In keeping with this, 85% of the film was built as physical sets, with only 15% generated digitally through visual effects (VFX). 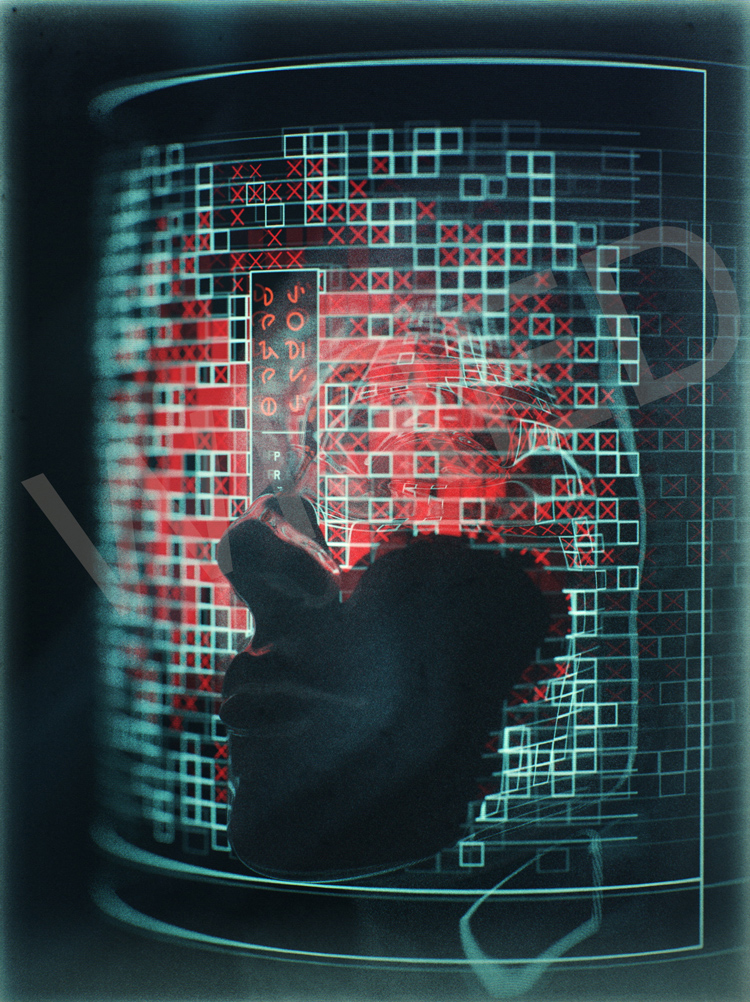 Territory started by using organic materials in the studio’s work. The research and development stages involved playing with natural substances such as bacteria, fruit and microcapsules – a biomaterial – which can be used as ink on electronic displays, to find new ways to create imagery.

The design team then used these materials alongside traditional processes such as photography and hand-drawing to create realistic effects, rather than reproduce them digitally.

For example, to create an image of a brain scan, the team photographed a cross-section of a melon and a grapefruit, which gave a similar texture. Overlay graphics were then designed in Adobe Illustrator, and these were projected into the real world, photographed and the two images were composited together.

“We wanted to create something with technology that spoke of human imperfection – a meeting of analogue and digital,” says Sheldon-Hicks. “To do this, we had to question the typical digital toolset of a designer. Going from analogue to digital and back again allowed for happy accidents and imperfections to naturally build into the design work. It was a wonderfully imaginative way to work.”

To create an imagined world focused on the three key ideas of brutality, power and scale, Territory also had to create discrepancies between the look and feel of different scenes. Design was used to show power structures and hierarchies between replicants and humans, and also between humans themselves to demonstrate different classes, says Sheldon-Hicks.

“In some graphics, such as the Wallace Corporation scenes, we went for modern, simple, clean and brutal – a hardened version of where user experience (UX) design is today,” he says. “For others, such as the Los Angeles Police Department, and the police’s flying car, we went with grimy, analogue and imperfect graphics.”

To create this contrast between “slick” and “analogue”, Territory looked at old technology and techniques to recreate out-dated effects. This included microfiche, where photographs of old documents such as newspapers and magazines are printed onto clear film; bioluminescence, where living organisms, such as fireflies, give off light; and archaic digital displays and projectors.

Using analogue techniques and materials aimed to “bring emotion and humanity into technology”, adds Sheldon-Hicks, and play on the film’s thematic contrast between the harshness of technology and the emotions that humans feel. This is best depicted in the character “K”, who, while a non-human or replica, ironically appears the most emotional and compassionate throughout the film. The idea was to create an “interplay between human and machinery”, and show that the two are interchangeable, says Sheldon-Hicks.

Territory’s whole process centred around interlinking three core elements in Blade Runner 2049’s production: design, story and technology. While the studio spent time hand-crafting and using analogue processes to recreate graphics, their work is not intended to take centre stage in the film; with the vast, dystopian, high-rise set, the UX design featured in the film is intended to be “small and subtle”, he adds. 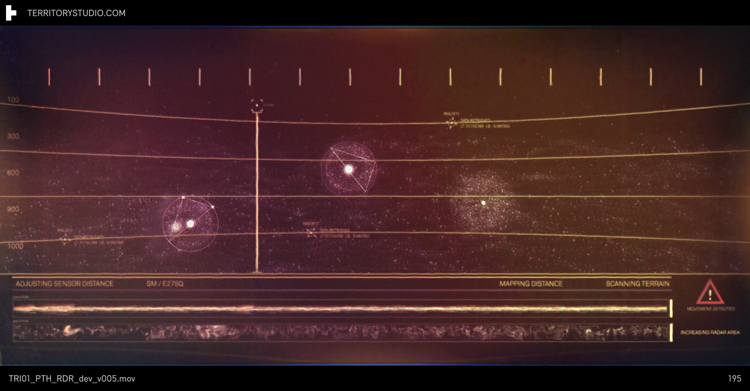 “Some of the graphics we have created are in a shot for only three or four seconds,” says Sheldon-Hicks. “They tell hidden stories, and in a few years’ times, fans will post on blogs about the ‘Easter Eggs’ they have found in certain scenes.”

The subtlety of some of the design work means that the graphic are easy to overlook, even for the designers themselves. “Nothing we made got cut out, everything ended up in the final cut,” he says. “On my first viewing, I completely forgot that we’d worked on it, I was so immersed in the film’s story. On second viewing, I was looking out for things we’d done.”

While using natural materials and traditional methods to create digital and tech-focused graphic elements was tricky, Sheldon-Hicks says that being able to be imaginative and creatively challenged was rewarding.

“Once we understood what the director and production designer needed, we were given a massive amount of creative trust and freedom,” he says. “We pushed the boundaries on creative elements rather than technical ones – it was incredibly stimulating and exciting.”