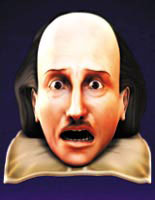 The BBC’s international entertainment channel BBC Prime has signed up an unusual host for its regular Comedy Night slot on Sundays: William Shakespeare, or rather a virtual reality Willy. Created by Digital Animations Group, the virtual bard is desperate for the spotlight and will do almost anything for a laugh – apparently. Devotees of the (real) bard may argue that he foresaw his virtual incarnation given the words of Macbeth: ‘Life’s but a walking shadow, a poor player that struts and frets his hour upon the stage and then is heard no more.’