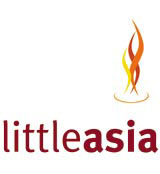 Newblack, the design division of marketing consultancy CWG, has created the identity, graphic design, signage and packaging for Asian restaurant, Littleasia, which opens in Liverpool in September.

The brand aims to become a national chain of restaurants quickly and is ‘actively looking for sites’ in Manchester, Nottingham, Leeds and Chester, says Littleasia founder Chris Hannon.

Interiors for the restaurant have been designed by Adrian King at JWK Design, who has worked with Hannon previously. The interiors are simple, with light woods but not minimalist, says Hannon.

‘I wanted to create the feel of a typical high street brasserie that will appeal to the middle market, rather like Pizza Express,’ he adds.

‘The identity depicts three aromas rising from a bowl, each representing the eclectic offering of Thai, Chinese and Indian food,’ he adds. The project is being led by Newblack creative director Dominic Frary.

The fee for the work was a four-figure sum, which ‘will increase greatly’ once the brand launches nationwide, says O’Toole.

Littleasia is a combination of Thai, Indian and Chinese cuisine. Research led by founder Hannon has discovered a gap in the UK market for authentic Asian cuisine in a ‘safe and assured’ environment, says Hannon.

Spurs brand to be reviewed