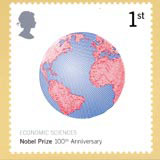 The 100th Anniversary of the Nobel Prizes is being celebrated by the Royal Mail in a set of six stamps, which are scheduled to launch on 2 October.

Designed by London consultancy HGV, each stamp is produced using a different printing process and covers each of the Nobel prize categories: chemistry, physics, physiology or medicine, literature, peace and economics.

The set includes a scratch-and-sniff stamp that smells of eucalyptus, which is the first time that scented ink has been used on British stamps, and a micro-printed TS Eliot poem that can only be read by magnifying glass.

Britain has had 94 Nobel Prize winners since the awards were first introduced on 10 December 1901.

Total eclipse of the sun