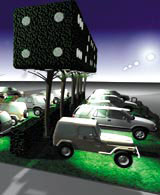 There’s no business like showbusiness. Trade shows, once dismissed as tatty, rapidly-thrown-together affairs, have reinvented themselves into calendar events in their own right.

Only a decade ago, event managers were responsible for the look of their show, and the results were generally predictable and lacklustre. With the help of designers, a new breed of show has emerged. According to Ian Rudge, co-founder and event director of contemporary furniture show 100% Design, ‘The days when you could simply flog the stands are over.’

The tradition of trade show design has its roots in the consumer exhibitions of the 1950s, when James Gardner lent his flair to the Ideal Home Show before moving on to work on the Festival of Britain. A long period of stagnation was to follow in the UK until ten years ago, when design was once again a recognised priority.

Back in the early 1990s, architect Tim Pyne persuaded the organisers of the London Gift Fair that his skills would lift their show, and went on to transform Earls Court 1 in three days flat. ‘Organisers only thought in plan – no one was thinking about space as a volume in totality,’ he says. Pyne went on to the Ideal Home Show and, in 1998, introduced the Concept House competition that helped to change the culture of the event – as well as being an effective way to get more visitors, it had the added cachet of attracting the likes of Branson Coates (the competition’s first winner), who would arguably be unlikely to set foot near the show otherwise.

Pyne was also on board to launch the fortunes of 100% Design in 1995, first housed in a modest marquee in Chelsea Barracks, two years later its success warranted a move to Earls Court 2. Commitments to projects at the Millennium Dome meant Pyne handed the mantle over to Ben Kelly in 1999. Since then, Pyne has designed concepts for the London Motor Show, planned for October this year, but unfortunately the show was cancelled at the last minute.

Although rarely taken seriously as ‘proper design’, the role of exhibition designer is far more taxing than many imagine. Where else are you expected to work with such a limited budget and strict time constraints, only to have your entire scheme destroyed in four days?

As well as providing cohesion to an event that is, by definition, made up of lots of disparate elements, and making a cavernous hall easy for dazed visitors to navigate, there is that elusive ‘X’ factor. ‘It’s hard to pin down, but shows either feel good or they don’t,’ admits Rudge. ‘If people are relaxed and happy, they’ll stay longer and spend more money.’ Ben Kelly, who is currently designing his third 100% Design show for Rudge, describes the challenge poetically. ‘It’s like being given a vast canvas – you mustn’t try to fill it, instead, you should just provide a sprinkling. Our job is to tie the show together, give it a sense of identity and a vibe – make it groovy,’ he says.

Pentagram partner Lorenzo Apicella has worked on several trade shows – most recently designing The Hub, the central feature area at WorkPlace, the biennial show that mixes office furniture with facilities management. He likens the exercise to masterplanning a small city. ‘It is a fairly architectural discipline: you create blocks, avenues, primary, secondary and tertiary routes, with areas of rest and points of orientation that punctuate the floor space,’ he explains. ‘It’s important to be aware of the acoustic and visual cacophony. Everyone is doing everything they can to wave their arms in the air and draw attention.’

Certain stands inevitably draw large crowds. Careful attention to pacing and layout, with the strategic placing of cafÃ©s and bars, can draw visitors’ attention through to the quieter areas. ‘Inevitably, there will be a hierarchy to the stands – it’s important to acknowledge this in the design,’ says Apicella. ‘If you can make the far corners more memorable and encourage visitors, it helps raise the value of the whole show.’

More than simply facilitating good flow around the hall, the designer’s job is to create impact. As such, many ideas are borrowed from the theatre. Colour and light, rather than form, can be used to create an illusion of space.

‘You need to be ruthless, to develop a shorthand,’ says Pyne. ‘It’s about doing a few big things, or many smaller, simple things. As an architect you are obsessed with detail, but suddenly that’s irrelevant – it’s the impression, the impact and the atmosphere that matters’. He believes too, in a spirit of resourcefulness. ‘There is never enough money and sometimes you have to be happy to make do,’ he says.

Colour is a cheap, quick way to unify a large space, and good use of colour is the golden rule of show design. But then, some rules are made to be broken – as demonstrated with Kelly’s ambitious scheme for this year’s 100% Design show, which is totally monochromatic and relies on light. Rather than resorting to the usual trick of suspended banners to fill the high-level space, Kelly has devised a less obvious solution that radiates from a central location – the main bar – where a series of high-powered lights are fixed to a telegraph post. Simple chair frames, designed in-house, will hang from wires on a motorised track, rotating constantly through the light beams, which in turn project overscaled and distorted shadows on to a series of fabric screens suspended around the hall.

This essentially low-tech idea serves a dual purpose: signposting the bar – an ever-important focal point – and animating the show without costing a fortune. The bar itself will have accents of red in an otherwise neutral palette of materials: woven plywood, reminiscent of an urban version of willow weave, wraps around the bar itself, which is partly made from exposed concrete breeze blocks.

BDG McColl’s response to the message-driven brief of WorkPlace, for which they have taken over the design of The Hub from Apicella, is rather different. The function of The Hub is to provide a point of clear orientation in the hall, a venue for meetings, debates and seminars and a social gathering space. The challenge was to create presence from within a deep floorplate. The group’s solution is to project coloured lights and text on to an 8m-high wall.

Text remains a tool that many designers are not completely comfortable with, but, according to BDG McColl joint managing director of workplace Phil Hutchinson, ‘Graphics have an important role in communicating aggressively – they make people stop and question what they see.’ He concedes the importance of choosing words carefully and says that while jargon is a turn-off, simple messages can have great impact. Pyne remains unconvinced, ‘Having a word-driven experience doesn’t turn me on – visitors walk straight past text. You don’t tell people that something is “fresh” or “modern”… you make it “fresh” and “modern”.’

All designers working in the field agree that simplicity is the watchword and that technology is rarely the answer. ‘People don’t go to shows to look at a computer screen,’ says Hutchinson. ‘When it’s off, the room feels cold, when it’s on, everyone focuses on that.’

However the design budget is spent, it will only account for a fraction of the total funds, most of which will be hoovered up by venue hire and visitor promotion. High-profile shows such as 100% Design, where an estimated 20 per cent is spent on design, have sent a clear message to newcomers that design is worth investing in. Since 1995, the show has grown by an enviably healthy 500 per cent, and this year it expects a record 30 000 people to visit.

‘If you employ a designer, you should give them the authority to do their job,’ says Rudge. ‘The constraints we put on them are purely practical.’ Every year’s show is rounded off with a post-event analysis session, where Rudge has a post-mortem walkabout with the designer to discover what has worked well, and what needs to be improved. Amazingly, so far there haven’t been any major disasters.

His only gripe is the show is at risk of becoming a victim of its own success. ‘As it becomes established, people’s expectations get higher and you have to keep giving them more,’ he says. But then, that’s showbusiness. m

David Bernstein: Back to the drawing board