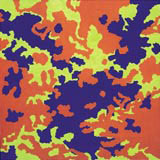 Artist Tim Newark explores The Future of Camouflage in a series of paintings depicting his favourite parts of the world, which include London’s Old Compton Street and Barcelona’s Gothic Quarter. The exhibition will show from 3-14 February.

Making It shows furniture, ceramics, lighting and product design by designers such as Jane Atfield, Michael Marriott and Terence Woodgate from 30 January until 20 February.

With a title inspired by Cecil B DeMille’s 1952 film about a US travelling circus, The Greatest Show on Earth shows new contemporary art, including work by Tacita Dean, Douglas Gordon and Sadie Murdoch.

The finalist entries to the Citibank Photography Prize show from 31 January until 22 March. The winner, from a shortlist of four photographers, will be announced on 27 February. The exhibition will be touring to DÃ¼sseldorf from 29 March until 9 June and Madrid from June until August.