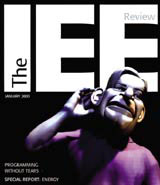 Engineering industry trade body the Institution of Electrical Engineers has unveiled a ‘younger, fresher’ look designed by Interbrand that aims to recharge its image for the 21st century.

Placing greater emphasis on technological development, the revamped identity focuses on the IEE acronym, adopting a plug-like logo with the strapline Engineering the Future.

‘Our role is to encourage innovation, thorough education, networking and professional development,’ says Cherry. ‘Vitally, the brand brings consistency across the entire organisation.’

Interbrand’s brief encompassed design guidelines for a website, www.iee.org.uk, as well as a monthly magazine, the 68-page IEE Review, and various marketing materials.

‘Working closely with the IEE we realised the brand identity had to position them [electrical engineers] as leaders in the field,’ says Interbrand creative director Jonathan Hubbard. ‘Electrical engineers are directly responsible for innovations in computing, software and telecoms among other things.

‘Their innovations directly affect everyone in our day-to-day lives. The identity reflects their stature and leadership. [It’s] built around a simple, modern logotype that is always used boldly and confidently, and uses photography that celebrates the innovation of the IEE members.’

Interbrand was appointed in March last year after a five-way pitch. The designer on the project was Nichola Charlton.

The IEE was founded in 1871 and its audiences range from schoolchildren to policy-makers in addition to its 130 000 members across the world.