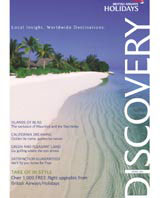 The past 18 months have been far from a golden era for the world tourism industry and the challenges it has faced look set to continue. With the US preparing for another war with Iraq and terrorism seemingly infiltrating our daily lives, many people now view overseas destinations as places of danger rather than a choice for holidays and relaxation.

UK bookings to mass market destinations in 2002 were almost 10 per cent below 2001 levels. Shortly after the events of 11 September 2001, the World Travel and Tourism Council said it would take three years for it to recover its losses. But, after last year’s bombing in Bali and subsequent fear of travel, such hopes soon ended.

Tourism boards around the world are now trying to reassure customers that holidays abroad are safe and enjoyable, a brief that has since been passed on to the design world.

But how do designers respond to such a challenging brief? Should travel agencies maintain their current formats in the effort to survive or are customers looking for fresh new designs that suggest adaptability, modernity and a consequent assurance of safety?

Lunn Poly is taking a bullish approach with the roll out of revamped store formats designed by Rawls & Co (DW 23 January). Created with a view to encourage customers to venture further afield with their holiday choices, the interiors are the development of a concept first created by Checkland Kindleysides in 2000.

‘The motivation for creating the design, giving people a sense of escape, doesn’t change [because of world events],’ he says. ‘And it’s the same if you’re in the store or you’re flicking through a travel brochure at home.’

Kindleysides admits safety concerns are moving up the passenger agenda and suggests giving customers computerised access to world news could be a solution for travel agencies.

Independent consultant and one-time head of design at BAA Raymond Turner disagrees. He thinks a focus on safety could, ironically, harm the tourism trade further. ‘The more you say “this is a safe place to go” the more people will wonder just how safe it is. I’d be quite concerned about the psychology when it comes to marketing and design,’ he says.

He says rather than reflecting an ability to change and embrace modernity, major revamps could actually reflect and encourage insecurity.

‘New visual styles of course have their place, but they’re not that important. The real question is how quickly, after the event, can we get back to normal. People like stability. I think what designers should do now is communicate, more visibly and against the current context, why places are worth visiting.’

The Nest brand development director Paul Wylde agrees holiday providers should retain a recognisable brand image, but says there are opportunities for innovation within the sector that will help encourage rather than deter customers.

Wylde feels consultancies should use sales material and packaging to be innovative and inspiring. The Nest has recently revamped Discovery, the BA Holidays magazine, and Wylde says the group focused on allowing the format to be ‘brave and daring’ while the familiar brand remained untouched.

‘The magazine is quite radical in design,’ explains Wylde, ‘not due to recent events, but because what people want from a break is different from what they wanted ten years ago. People go away for personal development, for relaxation. It’s not just about destination.’

Wylde agrees that however well promotional material is presented, the brand is ultimately the attraction for the customers. ‘After all,’ he adds, ‘research from the Henley Centre actually shows most people trust brands more than governments.’

‘Because of the Internet, the offer on the high street must improve or it will steadily die out,’ he says. Worthington feels design groups working in the sector should respond to the public’s demand for better quality information and a more personal service.

Emphasising the ‘human angle’ – ‘there you are, there’s your ticket, have a great time’ – is vital, says Worthington. Person to person contact provides customers with a sense of security and should be the selling point for any high street travel agency.

All agree design is effectively the last stop on tourism’s recovery route. Revamping interiors and literature may well attract customers from competitors, but designers are restricted in the degree to which they can alleviate customers’ travel fears.

‘I’m not saying design is limited, but it can only create an environment, branding and delivery mechanism that can be used to deliver a promise. The travel operators must ensure that promise is kept,’ says Kindleysides.

Lunn Poly propositions manager Doug Glenwright agrees design can’t work wonders. But, he says, it can overcome initial reservations about holidays abroad. ‘The design and branding draws people in and our staff then convert those browsers to bookers.’

So perhaps design won’t be the force that revives the flagging tourism industry, but it can be effectively used by travel agencies as a vehicle for conveying their promises and promoting a reputable image – the essential keys to recovery.