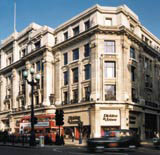 Laura Ashley last week became the second leading retailer to announce the closure of its flagship store on London’s Regent Street. The confirmation comes just five days after House of Fraser admitted it was shutting the doors on its Dickins & Jones store for good in January next year.

House of Fraser hopes to move its entire staff, including the visual merchandising team based at Dickins & Jones Regent Street, to other locations throughout London and the South East.

The 30-strong design team, based at Laura Ashley’s headquarters in Fulham, will remain unaffected by the closure of its flagship store.

Both shops have been Regent Street stalwarts – Dickins & Jones, with its 19th century heritage, has been around for almost 200 years and Laura Ashley for a quarter of a century. Both are blaming a combination of tough trading conditions and an increasingly competitive marketplace, but it is the soaring annual rents, now well above the million pound mark, that were the final nail in the coffin.

The Crown Estate owns the freeholds on Regent Street, but landlord Legal & General hiked the rent for the area after a review three years ago.

‘Our decision to withdraw our Regent Street store came after a rent review that saw an increase in rents to levels that would have been unprofitable to continue,’ says a spokeswoman for Laura Ashley.

Dickins & Jones released a similar statement: ‘As a consequence of the significant rent review effective from May 2002, the store had been gathering a negative contribution at both a cash and profit level.’

Dickins & Jones has assigned the building’s lease, which runs until 2038, to Shearer Property Group and Delancey Estates. These companies are planning to redevelop the site with a combination of retail, office and residential units and will start work next January. The two remaining Dickins & Jones stores in Richmond and Epsom will continue to trade.

Laura Ashley will continue to realign its property portfolio, reducing its fashion category and positioning itself as more of a ‘lifestyle brand’. Currently, fashion represents 22 per cent of total UK retail sales for Laura Ashley, but this will be slashed to around 14 per cent by next January. It will build its home furnishing business and open more stand-alone home furnishing stores, according to Mark Winstanley, creative director for Laura Ashley Home.

The demise of both shops should provide valuable lessons for the industry, says Mark Staton, creative director of branded environments at FutureBrand. ‘Dickins & Jones didn’t quite have a vision to keep it relevant. With the Apple store opposite, Zara down the road and Selfridges round the corner, it had to be very savvy with the property and what the experience was all about. The shop was a bit “So what?”

As for Laura Ashley, Staton believes the company’s strategy was too inward- looking; it missed a trick in really making the most of its flagship store. ‘A flagship has to do far more than sell merchandise,’ he explains. ‘It should generate something in the heart of the brand, create a wave, sell the brand.’

The HISTORY of DICKINS & JONES

Charging up the power station