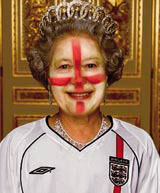 Think back to the last funny picture or link you were e-mailed – do you know where it came from? The chances are it was from a ‘bedroom creative’, an individual creating for enjoyment, rather than profit. In a medium where it’s possible for everyone to have a voice, the loudest creative noises often come from people you would least expect, working on a shoestring and using software tools such as Blogger or Flickr.

Dave Barton is a UK-based computer programmer with his own website. With a technical job by day, by night he spends time ‘Photoshopping’ – manipulating digital images for fun. And Barton’s home-made images are reaching an audience of thousands. You might know his work, it’s been featured (often without credit) in The Sun, The Daily Mirror, Zoo, Nuts and FHM. One of his most recent images made the cover of the Daily Star. Does he get paid for his creations? ‘No,’ he says. ‘It’s still a thrill for me to see my stuff appear in a paper or forwarded in e-mails. I think the fact that they come from the Internet means people will use it for whatever they like, and that’s not a bad thing really, is it?’

The reach of the potential audience is what inspires London-based creative Rob Manuel. His excitement with the Web was fuelled in 1995, when he made his first website for the spoof ‘Cow Liberation Front’. He recalls: ‘Somehow it got picked up by the media and before I knew it I was being interviewed live on South African radio. I suddenly realised, what’s the point of publishing to 50 people when thousands can see it on the Web?’ His more recent work is still reaching audiences of thousands, if not millions – including Dave Gorman, Victor Lewis Smith and the team behind BBC2 series Look Around You, all of whom have commissioned Manuel for commercial animation work.

Like many ‘bedroom creatives’ Manuel has no design training. For him, it is ‘all about the idea’. Developing styles to fit within his technical capabilities and still get the point across has led him to experiment with everything, from cut-and-paste Flash animations to Spectrum-style game characters, drawn with a Palm Pilot.

Recent Webby Award winner Joel Veitch is another cut-and-paste Flash animator who has found commercial success. Originally a recruitment consultant, Veitch retrained and graduated with an MA in Electronic Media. Again, a lack of design training lead Veitch to explore a variety of styles, before he settled on his now well-known cut-and-paste formula. Veitch started his new career from a shed at the bottom of his garden. His animations were embraced by a massive on-line audience and paid commissions followed. Now with a broad portfolio of television work to his name, he talks of changing his style in the future – perhaps mixing video and animation, or even directing. However, with all these plans, he is keen to ensure the freshness of his work is not lost. ‘I don’t want to lose sight of the idea, it’s important that whatever I make, it’s good entertainment,’ he says.

The idea that a strong on-line personal portfolio created for fun can lead to commercial success is also shown by Jonti Picking. The creator of the cult animation/ tune Badger Badger Badger, Picking is also the brains behind the much loved Weebl and Bob cartoon. The idea developed while he was working as a Flash programmer and its popularity led to a commission of 28 episodes by MTV. On the strength of this commission, Picking left his job and set up his own production company. He has been producing commercial animations ever since. Although he has an agent, Picking still finds most of his clients are fans of his personal work and commission him because of it.

While ‘passion’ has been a creative buzzword of the past few years, some of the people with the biggest creative passions are well outside the design industry. With no restrictions on the type of content they can create, no deadlines, no budgets, no preconceptions, their ideas come across as driven. The Web has proved the ideal medium to expose these ideas to millions and this is gradually influencing mainstream media. The future looks even more exciting; with on-line arenas for video and radio evolving, the Web is giving a creative voice to everyone – not just those who can afford to pay. 1 Dave Barton’s image of the Queen as a football supporter, which appeared in e-mail inboxes globally during the last World Cup.