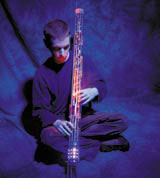 When you encounter kitsch souvenirs sprouting antennae or technologically assisted flirting, you know you have been exposed to the creations of designers in the still relatively fledgling discipline of interaction design.

But for all the variety, the postgraduate degree shows of Interaction Design Institute Ivrea in Italy and the Royal College of Art clearly demonstrate the different tacks taken by the rival courses – the RCA has a distinctly theoretical flavour, while projects at Ivrea are more practical and tangible.

Rory Hamilton, senior tutor on the RCA’s interaction course, suggests Ivrea ‘takes more of a business slant’, contrasting it with the heuristic line taken at the RCA. ‘We have been opening the course up as far as possible,’ he explains. ‘We really see it as a chance to try things out.’ He believes that people outside the industry really like the approach, adding, ‘In the present, constricted economic environment they don’t have the chance to experiment themselves this way.’ An example of this line of teaching is apparent in Matthew Falla’s Broadcasting House, a seemingly innocuous souvenir that – months after being purchased – begins to broadcast and takes over the household television.

Neil Churcher, a professor at Ivrea, denies the approach of the interaction course is governed by pragmatics. ‘We do teach physical and tangible skills,’ he says. Or as Ben Dove, one of the students graduating this year from Ivrea, says, there are ‘plenty of reality checks – the tutors are quite keen on suggesting it’s not art but design’. His degree piece is String Thing, a kind of electronic cello without a fixed pitch that responds to bodily gestures.

Yet like Hamilton, Churcher is keen to retain freedom in the way interaction design is approached. ‘There is still a lot of flux; interaction is still finding its feet. Once it was thought it would become a discipline in the same way that, say, graphic design is, but I don’t think this is a value of it – it’s more powerful as it is,’ he says.

It is perhaps in the least quantifiable areas of social and service design that the work of this year’s students is most interesting, with cultural, demographic, psychological or even sexual factors increasingly becoming part of the mix.

But it’s also the kind of work that is easily lost in the gallery format of the degree show. Take, for instance, RCA student Dik-Hong Angus Chan’s First Aid kit – a series of ‘questioning materials’ to help immigrants articulate their hurt.

The Lapjuicer, designed by RCA students Theo Humphries and Philip Worthington, is an altogether more in-your-face affair, unlikely to be daunted by any context. The piece, which features a juicing element strategically placed on the seat of a chair, plays games with the idea of ‘you can look but not touch’ effectively enough for it to also feature in the Victoria & Albert Museum’s current Touch Me exhibition (DW 9 June). ‘You can’t touch, but you can drink my juice,’ the object proclaims. Humphries claims the interaction (and any pornographic element) is in the mind’s eye. But that is not to say that sexuality isn’t there. ‘If you think about how people interact – sex is at the centre, you have to go where the traffic is,’ he says.

Sex is also at the heart of Urban Seeder, by Maya Lotan at Ivrea, which functions as a flirting service to allow you to ‘increase your chance of running into someone you find attractive’. Fellow Ivrea student Ruth Kikin-Gil’s BuddyBeads operates in a similar way. Lights on bracelets facilitate a private, non-verbal communication between teenage girls in a kind of extension of text messaging. ‘If you design for people, you need to understand their needs,’ says Kikin-Gil. ‘Often the most important ones are those that they don’t tell you – they will be grateful if you give them something they didn’t think they needed.’

Another kind of even more drastically ring-fenced interactivity is shown in Peripheral Needs by Christian Palino at Ivrea, which caters to needs of those with obsessive-compulsive disorders and questions the normative needs normally addressed by design.

The suggestion that interaction design teaching has now plateaued after years of obvious incremental advance is refuted by Tom Roope, a director of Tomato (and a former teacher on the RCA course and currently research fellow at Coventry University’s media arts course). ‘I still go back and get surprised every year,’ he says. However, Roope accepts that interaction is still struggling to define itself as an educational discipline, and believes interaction design teaching will bifurcate into two kinds of courses: conceptual art and product design.

Professor Jeremy Myerson, director of Innovation RCA, suggests that interaction design in relation to architecture and spatial design is the next frontier, seeing a particularly pertinent application in the transformation of the workplace.

In any event, interaction design as it is taught at the RCA or Ivrea is going to change. At the RCA, Tony Dunne has come in as a new broom (Profile, DW 9 June), and is likely to make considerable changes. Ivrea is being integrated with the Domus Academy in Milan and Gillian Crampton Smith (its director and founder of the RCA course) is leaving. And a whole new series of interactions, some designed and others not, will ensue.