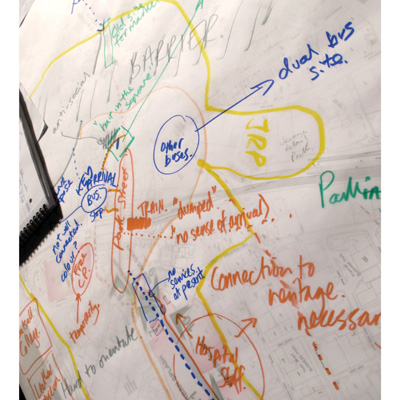 Manchester-based consultancies United Creatives and Urbed are working on a wayfinding scheme in the West Midlands town of Walsall that aims to focus on public art.

The consultancies were appointed to the work in April by Walsall Metropolitan Borough Council following a joint pitch.

The £100 000 Walsall Wayfinding Project, which runs until December, calls for ’an imaginative approach to wayfinding’, according to Urbed’s Jonathan Brown.
Brown says, ’We’re aiming to offer surprise and delight and not just a load of municipal fingerposts.’

Brown says the project focuses on five areas of the town: a new Tesco which is providing some funding for the scheme through a Section 106 agreement a new hospital, a new college, the civic area and the New Art Gallery, which opened in 2000 and was designed by architect Caruso St John.

Urbed and United Creatives are currently engaged in a scoping stage to finalise what projects will be taken forward, and by December the aim is for United Creatives to deliver a series of public art projects to aid wayfinding and Urbed to develop a map.

The consultancies held a workshop last week (pictured) and this week will bring a Routemaster bus to Walsall, which will operate as a mobile workshopping venue.
United Creatives creative director Chris Edmunds says the consultancy is looking at options including graffiti and mural tiling for alleyways.

He says, ’We’re looking at wayfinding that isn’t signage.’ Other potential options include using market hoardings for wayfinding.

Edmunds says the consultancy is also working on the Look Up Walsall project, which will aim to encourage local people to create their own signage, and Adopt a Shop, which will pair local retailers with local design students.

He says United Creatives is also working up a typeface to be used by the town, which is developing a series of quarters starting with St Matthews, the first quarter to be named.

Edmunds says, ’The project is multi-stranded. We’ve got a budget and we want to stretch it as far as we can.’