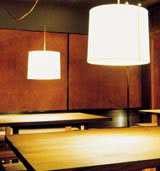 You’d think there was nowhere else to go in restaurant concepts. Surely the 1990s boom exhausted every permutation known to man, beast or crustacean. But that would be to underestimate the drive and determination of Alan Yau, co-founder of the innovative Wagamama chain of restaurants, whose new venture, Busaba Eathai in Wardour Street managed to squeeze through yet another tiny gap in the market.

For 38-year-old Yau, the thrill of opening a new place isn’t so much the sackfuls of cash that plop on to his desk at the end of each working week (though I’m sure he doesn’t object), as the satisfaction of seeing all the design elements come together.

As with the Japanese-themed Wagamama, Yau’s aim for Busaba was to provide first-rate cuisine, on a Thai theme this time, at affordable prices in a friendly, noisy, canteen-like environment. He is a strong believer in the Oriental idea of eating as a communal activity, rather than the more traditional posh restaurant philosophy of eating as a quasi-religious experience.

In 1992, when Wagamama opened in central London, it bridged the gap between fast food and casual eating. The fast turnover, bench seating, low prices and atmospheric buzz soon found a clientele among Soho’s trendy young things. What inspired the feel of the place, strangely, was English public school dining halls. “I liked the idea of social interaction between people who don’t know each other,” says Yau, who spent most of his formative years in Hong Kong. “If you go to Tokyo or Hong Kong you’ll find masses of places that offer good quality food at low prices with a McDonald’s-style turn-around.”

Yau grew up in the restaurant business. His family settled in the UK in the early 1970s, and his father finished up with two Chinese restaurants in Lincolnshire. While never seeing himself as a restaurateur – as a youngster he fancied being a fashion designer – Yau says he tinkered with the design side of the family business, to the extent that he brought in a London firm of architects, Falla Associates, to re-style one of their restaurants.

In the early 1990s he worked for McDonald’s in Hong Kong and was about to take up a franchise for the first branch to open in mainland China when he decided to return to the UK.

“I persuaded my father to sell up the family business and move down to London. He was confident I could make a go of it. Coming from a provincial town like Peterborough, we were shocked at first by London prices. But I managed to hold my nerve. My attitude was that, if I was going to become a player in the restaurant business, I had to create something that was going to compete with the best,” he says.

Yau joined forces with architect John Pawson, who taught him a lot about design aesthetics. Between them they arrived at the blueprint for Wagamama – “a sort of Europeanised version of Japanese eating”, as Yau puts it. After a couple of aborted projects and an advisory role in the creation of Satsuma – another Japanese fast food joint – Yau teamed up with David Chipperfield in 1996 to create a second Wagamama in London’s Lexington Street.

In 1998 he set to work on Busaba Eathai with designer Christian Liaigre, who was responsible for the Mercer Hotel in New York’s SoHo district, as well as the Joseph menswear shop. Yau and Liaigre’s idea was to create the kind of street cafÃ© found in Bangkok or Chiang Mai, where the rough wood of the huge square dining tables would develop its own natural patina with the grease from the plates.

But while the concept is basic, the materials are luxurious. The impossibly trendy Liaigre boasts his own forest in the Loire Valley, where he cultivates old oak trees and plants new ones.

Yau also brought in North to produce an identity for Busaba and it, in turn, commissioned Tomato Interactive (Tom Roope and Joel Baumann) to work with it on an innovative 50cm touch-sensitive screen menu that also, when not in use, comes up with eye-catching animations.

Now Yau says he is going upmarket with a more conventional 130-seat Chinese restaurant, opening this autumn, in the basement of the new Sainsbury’s building in Tottenham Court Road. If it takes off, it’ll give Yau the big player status he covets. Again he has collaborated on the design with Liaigre – graphics are by Peter Saville – so we can expect some radical variations on the more traditional Oriental look. In the next two years – the run-up to his 40th birthday – Yau hopes to open establishments in Paris and New York, the latter being, in his eyes, the restaurant epicentre of the world.

Whether they are Japanese, Thai or eel pie and mash, one thing is certain. Yau will be scrutinising the design aspects every step of the way. “I’m always seeking out new design talent… It’s the most enjoyable part of my job, working with top designers, architects and graphics people. Each restaurateur puts his stamp on his place. You can tell a Conran or an Oliver Peyton restaurant as soon as you walk in. That’s my aim, for people to know they’re entering one of my restaurants.”

1990- Yau returns to Hong Kong to work for McDonald’s

Allen to see to Spanish optician