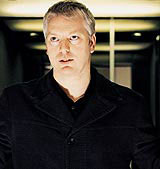 In five short years, 100% Design has become a world leader in contemporary interior design fairs. Its dynamic mix of small, independent designer-makers as well as the bigger players, not to mention the Mezzo catering, makes it a must-see in every design groupie’s calender.

Since it was set up by Ian Rudge and Rachel Robin, then joint organisers of Top Drawer, a gifts trade show, for the Blenheim Group (now Miller Freeman), 100% Design has increased its annual turnover by more than 500 per cent, and now attracts 350 exhibitors, 10 per cent of them from outside the UK.

Initially funded by the publisher Euromoney, the show was bought by Richmond-based Reed Exhibitions last year, but 39-year-old Ian Rudge is still in charge of the event.

“Rachel and I met a lot of talented designer-makers through Top Drawer, which gave us the idea of putting together a show for UK designers. We were keen to create a show that we would enjoy running. I like the fact that exhibitions are tangible, you see what you’ve achieved and you deal directly with people whose lives are sometimes changed by those four days at Earl’s Court,” says Rudge.

They wanted something that would complement the long-established and more traditional Decorex, so they decided on contemporary design. “Historically, contemporary design hasn’t really filtered down to the high street. But in recent years a lot of the big stores have become a lot more design-conscious, which has had the knock-on effect of making consumers more aware of what’s available.

“Although 100% Design is a trade show,” says Rudge, “we’ve always had a day when it’s open to the public so that they can see what’s being produced and have direct access to individual designers. We also invest heavily in marketing and PR. Last year’s show attracted 710 members of the press, including a large contingent of foreign journalists.”

So how does a newly established designer-maker set about establishing a stand at this increasingly prestigious event? “We’re not designers, we’re exhibition administrators, so we appoint an advisory panel made up of architects, designers, retailers, journalists, manufacturers and distributors to decide whether or not something is suitable for inclusion. If it’s borderline then we’ll cast the deciding vote. If we’ve turned somebody down, we leave the door open for them to re-apply at a later date. Sometimes it’s just a matter of submitting a poor application, so it’s only fair to give people a second chance,” says Rudge.

It has been gratifying for Rudge and his team to see small independents like Inflate, maker of inflatable furniture and accessories, expand from a 6m2 stand in 1995 to a 40m2 stand last year. “It was one of the reasons we started the show in the first place – to give smaller outfits a showcase and expose them to serious buyers from all over the world. Similarly, larger manufacturers and distributors have the opportunity to see designer-makers they might be unaware of. It’s this mix that makes us unique,” says Rudge.

The first four shows were designed by Tim Pyne of Work, who went on to design three zones at the Millennium Dome. He was unavailable last year – work put him under too much pressure – so Rudge brought in the equally esteemed Ben Kelly, who will also be working on this October’s show. “How we put 100% Design together is paramount. I feel a show about designer products should look as if it’s been deliberately designed, not just thrown together. It’s the details that make a difference, and making sure there is good food and drink,” says Rudge.

Rudge may not regard himself as a designer in the technical sense, but he is clearly somebody with keen design antennae who knows the secret of combining business with pleasure.

1979- Comes to London to train as a policeman