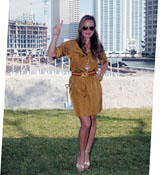 Design and celebrity are being intertwined to market condominiums in glitzy Miami. Clare Dowdy joins Philippe Starck and Jade Jagger at a ground-breaking ceremony in the Sunshine State

If you want to experience design being exploited to its full potential, or perhaps even beyond its potential, head for Miami. The city is seeing a rush of property development that puts London’s efforts to shame. Swathes of Miami Beach and its environs are almost wholly given over to condominium-style development, and much of it is on the most colossal and extravagant scale.

Some of this architecture is of dubious aesthetic quality – and that’s the good stuff. The rest is downright ugly. In fact, in some areas, it’s hard to tell a residential block from its corporate neighbours. Miami doesn’t seem to have much truck with the idea of signature architects creating headline-grabbing crowd-pleasers, à la Richard Meier or Santiago Calatrava. Even the city’s yet-to-be-completed opera house, by Cesar Pelli, is unlikely to pull off the Guggenheim effect.

When architecture itself isn’t being called upon to act as a point of difference, something else needs to take up the baton. And that’s where design comes in. But this is not about Florida’s equivalent of Four IV or even Rasshied Din getting involved. This is the celebrity playground of Miami, after all. No, if you want half a chance at turning heads with your new condominium construction, you need to wow them with the A-list. And who better than Philippe Starck? He’s a personality, he’s European (so he must know about design) and he’s involved with a property company callled Yoo.

But even the biggest international name in design cannot make it on his own in Miami. Here, celebrity is king or queen, so Jade Jagger (pictured top), daughter of Mick is on hand. Jagger and her architect business partner Tom Bartlett are new shareholders of Yoo, and Jagger has been appointed creative director. They are working on Yoo projects in New York, Austria and Gloucestershire, though, somewhat confusingly, they’re not designing anything in Miami.

This didn’t stop them turning up at a groundbreaking ceremony for Starck’s latest creation, though. Icon Brickell is 50-something storeys of high-class condominiums, complete with spa, pool and jaw-dropping entrance lobby. Due for completion in 2009, it’s being built with a whopping $700m (£400m) construction loan – the biggest so far for Miami.

In fact, it’s the lobbies where these designers really come into their own. These are the flashiest parts of the building, the area designed to make visitors gasp and owners smug. Starck, who is no shrinking violet when it comes to bold statements, likes to bedeck his lobbies with outsized furniture and stage set-style furnishings. US designer David Rockwell, who got his hands on the lobby of the Murano Grande complex a few years ago, went for a low-key but sexy approach in a warm terracotta.

Meanwhile, Canadian flavour of the month Yabu Pushelberg has done the Apogee, having completed Tiffany’s flagship store. So, while there is, as yet, nothing to see from the Jagger-Bartlett drawing board, it appears that in Miami, actually producing design work is rather old hat. Much more de rigueur is to be able to shake your stuff for the bank of local paparazzi and inject a bit of vicarious superstardom into a building site. No mean feat, but Jagger pulled it off with much aplomb in a striking mini-dress and high wedges. No matter that she has no design training – she has an eye, and she says she’s fascinated by how families live and use space.Starck’s trademark beret, meanwhile, was perched on top of a hard hat.

Of course, these daytime ground-breaking ceremonies in Miami are two a penny – so much so that some talk of a condominium development glut. Not so the people at Related Group of Florida, the developer behind the Yoo, Rockwell and Yabu Pushelberg creations.

Opulence is the name of the game, with the nocturnal dos taking cues from nightclub openings, such as Icon Brickell’s cocktails, champagne, sushi and live music being enjoyed by the city’s expertly coiffed and buffed. But then, when you’re trying to flog multi-million dollar flats, with everything from electric blinds to ‘midnight kitchens’ (kitchenettes off the master bedrooms), you may as well go to town.

Put students in their place