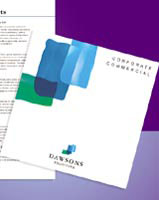 However well you communicate with a client and regardless of the level of trust you establish, most designers will, at one time or another, have experienced blank stares from uncomprehending clients unsure of the subtleties of branding, graphic design or packaging.

But when a client is completely new to design, and is itself a well-established institution with centuries of heritage, communication between client and designer becomes even more important.

The work is unveiled in June (DW 23 May). The learning process for Dawson kicked off on day one, says Hypa Creative managing director, Viki Clarke. ‘[Dawson] had never briefed a consultancy before, or held a pitch.’

The firm initially wanted a consultancy to redesign its website, but Hypa ‘hand-held’ Dawson at the pitch stage and helped them redefine the brief to incorporate the brand identity itself, as ‘it didn’t have one’, Clarke says.

‘Dawson didn’t understand the concept of a brand, and defined its company by the quality of its work, the amount of new business it won on recommendation and its base in [London’s] prestigious Lincoln’s Inn. The look of the company was unimportant,’ she explains.

Despite explaining the importance of branding and its approach, Hypa only truly won the client over when it conducted research among Dawson’s employees, clients and partners, which proved the need for an identity.

‘The research was critical to Dawson accepting our assessment of the company,’ Clarke says. ‘Most revealing to them, was clients’ perceptions of the company, something Dawson had never asked before.’

The logistics of the working relationship were tough. With no marketing team, Hypa had 27 points of contact with partners, all with ‘strong, subjective opinions’. As solicitors, they were all very analytical, had a thirst for knowledge and, most importantly, were extremely excited ‘as they’d never considered branding before’, Clarke says. ‘It was important that the partners felt part of the process,’ she says.

At the naming stage, the relationship became ‘mutually educational’ as both sides learned about the other’s industry. ‘They deferred to our design experience, but we let them teach us about the law market,’ she says. Thirty different branding concepts – almost one per partner – were created, then reduced to three favourites following staff feedback.

The identity had to modernise the law firm’s image to appeal to new clients, but retain its heritage to avoid alienating private clients whose families have been with the firm for over 200 years, Clarke says. ‘There was a dichotomy of old and new school – a struggle between change and inertia.’

Following the brand identity work, Dawson hired a full-time marketing manager in March and is thinking long-term about the management of the brand.

Dawson aside, working with green clients can mean they have their own way of doing things and may be reluctant to change. An unnamed client, for which Hypa undertook a four-colour print job, insisted on sticking with their tried-and-trusted local printer with which they had a long-standing relationship. The only trouble was, it only had two-colour presses, Clarke says.

‘We always recommend to new clients that we see a job through from start to finish, and 90 per cent of the time they’re happy with that,’ she says. The trouble starts when a client new to design is intimidated and tries not to show it. In some cases, they may never have had outside input into their company before, she adds.

Intro creative director Adrian Shaughnessy was faced with a similarly unversed client in London’s Royal Academy of Music, when Intro was appointed last November to redesign the 2003 prospectus. The brochure is the calling card for the academy, which was established in 1822, and is one of the world’s most prestigious conservatoires. Shaughnessy says the client was upbeat about Intro’s work as it doesn’t ‘buy’ design that often. ‘It wasn’t jaded or cynical,’ he adds.

But the initial presentation was uncharted territory for both Intro and the academy, and it was difficult to assess whether it had taken on board Intro’s ideas, Shaughnessy recalls.

Once he realised it had, the academy was ‘very refreshing to deal with’, he says. ‘It didn’t use crass branding terminology and was actually much easier to work with than clients experienced in branding and image projection,’ he adds.

Just as Dawson counted on its heritage to sell itself, the academy hasn’t needed to worry too much about its visual image. ‘It has relied on its reputation for excellence,’ says Shaughnessy. ‘But as the world of higher education becomes more competitive, it has been forced to think about the image it projects. No one is immune from this process,’ he says.

As with Hypa Creative, Intro had to find a tone of voice for the academy that was ‘truthful and reflected the mix of tradition and modernity that characterises the institution’, says Shaughnessy.

Intro undertook a lot of research prior to starting work, this time among students, to find the right tone of voice, something that impressed the academy – and no doubt reassured it, too. ‘We were very enthusiastic about [Intro’s] approach, as it took time with our students,’ says development director Fiona Newton.

The principles remain the same, whether the client is a seasoned design shopper or a rookie. And with the latter, both sides can learn something new.