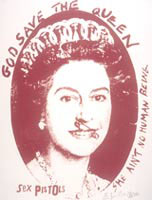 Just in case you’d forgotten about it among the frenzied hype of the World Cup, the Golden Jubilee celebrations kick off this weekend. Don’t get me wrong, I have no intention of standing outside Buckingham Palace waving a Union Jack on a stick. I’d much rather celebrate 50 years of illustrious rule by taking a look at a selection of British artists’ responses to the Jubilee celebrations, chronicled in Britart’s Golden exhibition.

Emma Ridgway, head of the Britart gallery, says the views of the artists were predictably one-sided. ‘I was chatting to the artists about the show,’ she explains. ‘They were saying, “well, you know it’s not going to be very pro [-Jubilee]”. I just said go for it. I was really open to seeing what they wanted to do.’

Jamie Reid has produced a poster in the same grainy style he created for the Sex Pistols’ album artwork. This time, unsurprisingly, the work is printed in gold, lending his collage of grainy newsprint images and ransom-note typography a peculiar sense of authority.

One artist whose work is sure to provoke a grin is Abigail Fallis. She embroiders Union Jacks on to classic oversized Y-fronts. However, on the Britart website she deadpans, ‘I am not just an artist who makes a load of old pants.’ Fallis claims pants are ‘steeped in British history. Y-fronts are the quintessential British undergarment’.

They’re also about as naff as a handkerchief tied at the corners and worn as a sun hat. You could say Fallis’ pants ridicule Britain’s reluctance to break with past conventions, that it is trapped in the past wearing big pants, but Ridgway sees it another way. She says Fallis’ work has ‘a real comic twist to it, but it could also be a kind of nationalistic “even my pants are hand embroidered” message’.

Portrait artist Josie McCoy paints ghostly, penetrating portraits of celebrities. Ridgway says McCoy is producing ‘a copy of Lucian Freud’s painting of the Queen that caused all the furore, but in her own style’.

McCoy’s work celebrates heroines of pop culture, and captures stars from Coronation Street, EastEnders and The Royle Family in oil paintings. It would be interesting to see the Queen given the same treatment.

Adam King’s work for Golden is an incongruous image: he is exhibiting a photograph of a seedy amusement arcade with a painting of the Queen hung on the wall in the background. ‘There’s something really pop about it, something that really clashes,’ says Ridgway. ‘It’s peculiar: everything that comes out of that slot machine will have the Queen’s head on it. In a way, the whole place is swamped with that face, but at the same time she would never be seen dead in there.’

Ridgway is also commissioning schoolchildren to create paintings with a Jubilee theme. She decided that ‘the only people who are really uncritical or unthinking about whether they’re pro or anti [monarchy] is kids, because for them it is just presented as another thing to celebrate.’

This work and much more will be exhibited in Britart’s gallery in London’s Spitalfields – a bright, spacious environment decked out with blond, unfinished wood and whitewashed walls.

The atmosphere in the gallery is just like the decor: relaxed and unpretentious. There will also be bunting and a Union Jack lightbox to reinforce the down-to-earth feel of the gallery, adding the final touch to an exhibition that celebrates a controversial issue with wit, humour and energy.

Golden shows at Britart, 60-62 Commercial Street, London E1 from 3-30 June and on the Web at www.britart.com