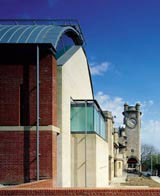 London’s revamped Horniman Museum will open in early June, featuring a new extension by Allies and Morrison and two new galleries, the Centenary Gallery and Musical Instrument Gallery, which opens in the autumn.

The revamp will be officially launched by the Secretary of State for Culture, Media and Sport, Tessa Jowell on 11 June, ahead of the public opening on 14 June.