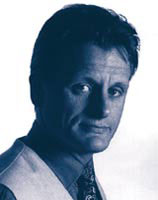 We are living in a world of globalisation, consolidation and, arguably, homogeneity. The big are getting bigger by swallowing up the smaller fish. This is a trend happening in every industry, be it retail, manufacturing, financial services and, of course, design. Furthermore, in many cases this drive for market dominance inevitably leads to deflation in the respective sectors as the bigger fish get evermore aggressive by using their muscle and buying power to undercut those competitors that can’t leverage economies of scale.

I think it was Rodney Fitch who once said ‘only one brand can be the cheapest, the rest have to add value by design’. Very wise words from someone who has been around the design block once or twice. These words, I think, were originally aimed at client companies to encourage them to embrace design and to create differentiation, thereby driving their individuality and points of difference to compete beyond price.

However, these words are also true for the design profession itself. I look around me at the design landscape and part of me fears for our profession. Many of the founding fathers of our industry are now retired from the consultancies that once bore their name while many others are enjoying the ‘earn out’ from the sale to one of the big networks.

What is left – you could argue – is a homogenous mass full of resource, but lacking in soul. I’m sure many clients of the past 20 years or so often chose their consultancy based as much on their individual personalities (even eccentricities) as their ability and track record.

The challenge for our industry, therefore, is to fill the ‘personality void’ by creating a collective culture. This is easier said than done and using a few token icons around the office such as punch bags and pinball machines will not create a culture – gimmicks alone are nothing more than the froth on the top. Real cultures are just that – real. They are like the roots of a tree hidden beneath the surface and if they are tampered with it can have fatal consequences.

I believe one way to create a real culture at a consultancy is to allow everyone in the business to own the business. Many consultancy heads shy away from such structures because they see them as difficult to administer and believe that you have to buy back shares as people leave or issue more as people join. Other owners may simply feel disinclined to give away some of their hard earned value.

The truth is, inclusive ownership is very simple. In Elmwood’s case, we have created a trust fund that owns a percentage stake of the business. The way this works is simple. If you are not a shareholder in your own right you become a beneficiary of the trust and you are only a beneficiary of the trust if you are a current employee. So, if the business is ever sold, floated or merged, all current employees receive a share of the sale proceeds of the trust-owned shares.

Is this ownership thing all about money? Is it a crafty way for majority shareholders like me to get everyone to work harder (therefore making the business more valuable for me) with the incentive that they will benefit as well? Well, if it was, I’m not sure this would be the best way to achieve it. It would be much simpler to just reward people through performance-led bonuses. Moreover, the truth is that if everyone in the world was one-dimensional and that one dimension was avarice, then most wouldn’t work in design at all.

In my experience, giving people a share of the company doesn’t suddenly make people greedy or make greedy people satisfied. In many respects, the effect can be like giving gym membership to a sloth – the membership alone won’t necessarily get them fit. Collective ownership is at the heart of an ethos that says this business is about collective responsibility.

Moreover, it is about creating a culture that builds and lives beyond the mandate of the founding father. And perhaps of even greater significance, employee-owned businesses, by their very inclusive nature, breed immense loyalty.

But don’t just take my word for it. According to recent research undertaken by The Centre for Tomorrows Company, the business-led, not-for-profit think-tank, employee-owned businesses have outperformed the FTSE index over the past ten years and I, of course, was personally delighted that Elmwood was one of the 43 companies highlighted in the study.

In a world that is fast losing its individuality and unique spirit, I believe that in the design profession, businesses such as ours need to practice what we preach and allow our personality to stand out, as well as our product.

After all, our product is our people and you could argue that great creativity on its own is simply the ticket to the game.

The ‘voodoo chile’ strikes a chord with Audi team