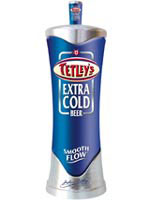 LMC Design has branded Tetley’s Extra Cold and Tetley’s Imperial Cask, the brand extensions from Carlsberg Tetley that will be launched in June.

The consultancy has created the identities and point-of-sale material for the ales, which form part of a £12m investment in the brand.

With an aim to ‘contemporise’ the ale sector, Tetley’s Extra Cold has been developed to attract new drinkers into the category.

‘Currently 50 per cent of ale drinkers are over 50 years old, which means we need to create compelling propositions to attract new drinkers to the category to ensure its long-term success, while being careful not to alienate our existing drinkers,’ says Carlsberg-Tetley managing director, brand and sales Doug Clydesdale.

LMC Design creative director David Johnstone says the Extra Cold identity is substantially different from that of the original Smoothflow.

‘There has been no secondary packaging work for either of the [brand extensions],’ he says.

LMC Design, which was paid a five-figure fee for the work, was appointed last summer. It won the work without a pitch.