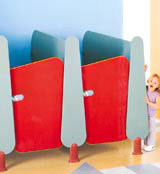 PSD Fitch has designed a range of toilet cubicles for sanitary brand Armitage Venestra, part of the American Standard corporation.

The cubicles, which will launch in June, come in three designs, with two intended for use in schools and one aimed at adult washroom areas in retail, airport and leisure environments.

The Lollipop cubicle has been created for pre-school nurseries and junior schools. PSD Fitch senior designer Roger Crabtree says, ‘Adult-sized cubicles can be imposing for children. [Our design] is more approachable. It’s smaller scale, softened off in terms of form and uses attractive colour schemes.’

The Surf cubicle is aimed at the secondary school market, where washroom areas can often be difficult for teachers to supervise.

Crabtree says, ‘School toilets continue to be at best unpleasant and at worst threatening environments. [To prevent vandalism,] the quality of the installation should be as high spec as possible, but usually quite the opposite is true.’

The group’s design improves the privacy of the individual cubicles and is ‘a move in the right direction’ in terms of reducing the ‘ghetto effect’ of school washroom layouts, he adds.

The adult design – called Matrix – is a complete departure from the conventional cubicle format, says Crabtree. Full aluminium extrusions sweep from floor to rear wall, allowing for the incorporation of light and sound.

The consultancy won the work in March last year, on the back of its contribution to a BBC Tomorrow’s World programme on the school of the future.