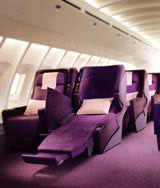 Singapore Airlines this week launches its revamped business class seat designed by Italy’s Avio Interiors, representing a design investment of over £1m and an overall project investment of £65m by the airline.

The new generation seat, which reclines into a flat bed, will roll out across the airline’s 43-strong fleet over the next year.

The project is the culmination of 18 months’ work and is only in part a response to the launch of similar products by competitors such as British Airways and Virgin Atlantic Airways, says Singapore Airlines vice-president product innovation Tom Boozer.

‘The competitive environment had some impact, but was really a validation of our thinking. We know what our customers want and have been working on and planning this project for some time,’ he says.

Boozer says function led form in design of the product and that a comfortable sleeping position and more space were key design considerations.

‘Fundamentally the design emanates from what we want the seat to do. People want to sleep and we traded certain things off to deliver a comfortable, large sleeping surface,’ he says.

Avio Interiors chief executive Franco Mancassola says the biggest challenge was delivering a seat that was functional and aesthetically pleasing.

‘Singapore Airlines gave us certain functional requirements that had to be met, and weight was also important. The seat also has to look good and [invite] passengers to sit in it,’ he says.

‘The seat is very advanced with many moving parts, so the outside body needed to accommodate the mechanical aspects,’ he adds.

The group worked with designer Christine Ludeke of Ludeke Design in developing concepts for the seat, which uses cushioning foam developed by US space agency NASA, to shape itself according to the contours of the body.

LuxSAT identity has Springpoint in its step