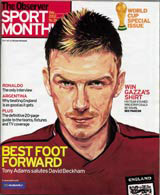 Imagery always figures large in football graphics, but that’s no reason to make it clichÃ©d action shots of players. For the Observer Sports Magazine’s World Cup guide cover, art director Gary Phillips commissioned a Simon Henwood portrait of David Beckham because, as Phillips says, ‘it was classy and very different. Difference being the most difficult thing to do in a newspaper’. The When Saturday Comes wallchart too goes for tongue-in-cheek, Japanese-themed illustrations by Dave Robinson featuring Godzilla, Sumo wrestlers and pagodas, alongside witty text likening stadia to a particularly nasty verruca or a bidet. Cheeseman explains it thus: ‘Illustration can communicate immediately that something is obviously critical, satirical or frankly rather immature. With the chart, we used [Robinson’s] illustrations to make it stand out and maybe raise a wry smile.’ Cheeseman will be supporting Senegal, Phillips will be supporting Italy. See, it’s all about difference.