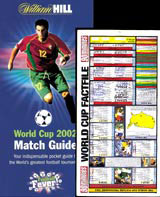 Pocket slide guides lend themselves well to masses of information in a limited space and easily digestible form, so it’s no surprise that bookmaker William Hill adopted them as far back as 1986 for the Mexico World Cup. It’s a tradition the company has kept up for each successive tournament. The 1986 guide, a four-page, A5 extravaganza, was a masterpiece of information design, which football magazine 90 Minutes actually improved on by cutting it in half when it came up with its own slide guide for the 1994 US World Cup. Paring down was the in thing at the time.

By France 1998 William Hill’s guide was tiny, as it did away with information such as player profiles and venues. Still, it remains one of the most effective guides around, and seems to have set the trend for future slide guides. Poulter Partners was commissioned to create the 2002 version for William Hill, whose marketing manager Andy Warner says, ‘The great thing about the guide is it’s easy to use, with simple colours and typefaces, and is consistent with William Hill’s football brand product. [The guide] is hugely popular with customers, and lots of people come in to request it,’ he adds.

and politicians should be on their heavy mettle