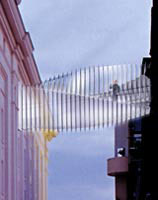 While some architects have sat twiddling their thumbs over the past couple of years, Wilkinson Eyre has been hard at work. The Millennium Lottery fund smiled benevolently on this group, which bagged Explore@Bristol; Lockmeadow Bridge in Maidstone, Kent and the Gateshead Millennium Bridge. Without a doubt, however, the brightest feather in its cap is RIBA Stirling Prize-winning The Magna Project.

Designing for such a huge space and handling a complicated budget presented a huge challenge, but the finished result has been a resounding success.

The group, now 50-strong, was founded in 1983, under the name Chris Wilkinson Architects, but in 1999 was re-named to recognise the contribution of co-director James Eyre. Prior to lottery fever, the group was best known for its flair with bridge design, and its aptitude for designing quirky sheds – such as James Dyson’s Research & Development Centre in Wiltshire – but now the office profile has shifted up a gear. ‘We worked very hard after the lottery appointments to get to do serious mainstream stuff and to convince people what we were capable of,’ says Wilkinson Eyre director Paul Baker.

Now competing with the big boys for prestigious large-scale office projects, the group is currently working on two sizeable commercial schemes in London, including sprucing up a 27-storey building to which it is adding a 3-storey all glass extension and a piazza at the front. ‘But we still want to do the museums and bridges – they keep the element of fun in the office,’ says Baker. To prove the point that being established doesn’t have to mean being dull, the office is working on a diverse range of schemes at the moment, among them the Heritage Lottery-funded National Waterfront Museum in Swansea, and a spiral glass cube bridge spanning a pedestrian street in London’s Covent Garden for the Royal School of Ballet, which has just won planning approval. Already involved with numerous transport projects, Wilkinson Eyre is now breaking into the education sector and currently overhauling City and Islington College.

As well as allowing the group to be taken more seriously, Magna has left another legacy: ‘Since Magna we are all using more colour,’ says Baker.