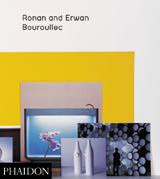 In product design, certain names just acquire momentum and keep on getting bigger. These are the names that satisfy the demands of the fashion business and fashion-watchers. Such designers are anything but fitness-for-purpose, form-follows-function wallahs. Instead, they are the purveyors of endless novelty in the form of evocative, often Expressionist shapes. Into this category fall the current darlings of the design-as-fashion brigade, the Bouroullec brothers. A big fat book on these rising stars? So soon?

Ronan and Erwan Bouroullec, like Marc Newson, have that Bruce Springsteen problem. Just as The Boss had to live up to his early billing as the new Bob Dylan, so these names have to shoulder the burden of being dubbed the new Philippe Starck. Red has to be the new black. It is still only six years since they first showed up on the radar, they are still only 31 and 27 respectively, but six years is a long time in fashion. So: is this book an objective assessment of the Bouroullecs’ work thus far?

The hell it is. Be warned: this book has no author’s name attached. Alarm bells ring, red lights start to flash. A monograph without an acknowledged author is a PR puff. This is the Bouroullecs’ presentation of themselves, plus a few words from some of their famous clients – Rolf Fehlbaum, Giulio Cappellini and Issey Miyake. They controlled the book’s design, too, in collaboration with Geoffrey Cottenceau and Julien Gaillardot. So what you are buying is a nice, uncritical picture book. But it is nonetheless interesting.

Their best work has a joyous, unforced quality to it that is to be prized. Their early Lit Clos – a modern take on the medieval enclosed bed – for Cappellini has it, as does their Joyn work system for Vitra, which again plays with ideas of enclosure.

Vitra’s Fehlbaum makes the obvious, but necessary point: a lot of the Bouroullecs’ success is down to the fact that, um, there are two of them. ‘Mixing brotherly intimacy and competition, they challenge each other, creating a dialogue that moves things forward: sooner or later, they have to come up with a solution that they can both accept,’ he writes.

Just so. Like the artists Jake and Dinos Chapman, the Bouroullecs are both collaborators and critics. They can get tough with each other in a way that the associates of other big-personality designers cannot. Which is fine. They are clearly talented. But I don’t think you can yet say for sure that they are blisteringly original. You can see a lot of the influence of other designers in their work, at all levels from the showmanship of Starck to the intense restraint of Jasper Morrison. At times they seem to indulge in pretty shape-making for its own sake, at others they pare down their designs ruthlessly.

It’s as if they haven’t yet been at the game quite long enough to evolve a recognisable style of their own. Except, perhaps, for that persistent tinkering with the architectural idea of semi-enclosure, explored in several projects, which seems to be a preoccupation of Erwan’s.

For me, this book shows that the Bourellecs are very good, but not yet great. The next few years will show us if they can transcend fashion with work that can stand the test of time.

Ronan and Erwan Bouroullec is published by Phaidon, priced £29.95