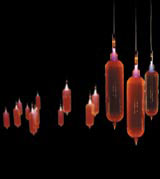 An interview with the winner of The Bombay Sapphire prize 2003, arranged through the PR, had all the potential of becoming a surreal, Kafkaesque affair.

Not only was the identity of the interviewee hidden from me until the very last minute, but I was also sworn to secrecy that I would not tell him that he had won. However, I needn’t have worried, since Paul Cocksedge is such a force in his own right that any conversation with him assumes enthusiastic and slightly hilarious tones. He is young and incredibly bright, with a level of assurance justified by a creative curiosity that allows him to combine the apparently complex scientific working of electrical conductivity with experimental forms and shapes.

Since graduating in 2002 from the Royal College of Art, Cocksedge has been busy making his sculptural lights for a crowd of collectors in the know. Most of his fame as a modern master of deceptively simple- looking lights comes from an exhibition he held at the Milan Furniture Fair with light supremo Ingo Maurer. There Cocksedge showed NeOn, the installation that has also earned him the first prize in the Bombay Sapphire competition. A set of hanging glass vessels filled with gas, which glows as the electric current passes through, NeOn plays with the effects of high voltage, but also with the idea of keeping the workings of technology mysterious, a theme dear to Cocksedge’s own heart.

You sense that not only did Maurer provide Cocksedge with an international platform at the right time, but also that he holds the Italian light designer in high regard. Like Maurer, Cocksedge says he aims to straddle the worlds of art and design, but professes a sound commercial attitude. Most of his lights are produced by British manufacturers and sell like hot cakes either as limited edition pieces or as bespoke commissions.

Ron Arad, his teacher at the RCA and a judge on the Bombay Sapphire prize panel, is also a mentor. Via Arad, Cocksedge displayed his Watt light at the Issey Miyake gallery in Tokyo. Watt is a cleverly conceived light that has a drawing pad attached to it via a clip. The switch is based on the conductive properties of the graphite found in pencils. Connecting two points with the pencil line completes the circuit, switching the light on. When the line is rubbed out, the light switches off.

As Arad defines it, ‘Watt gives a whole new meaning to the simple action of turning a switch on and off. The concept […] is charming and artistic.’

Way before Cocksedge won the prize, Bombay Sapphire commissioned him to design a ‘Sapphire and Tonic’ light for the Bombay Sapphire Blue Room exhibition at the Geffrye Museum in London, a selection of works by 30 international architects, designers and artists, from which the winner of the Bombay Sapphire prize has been selected.

For Cocksedge, ‘It was important that the object possessed a subtle element of intrigue.’ Cocksedge shows me his simple, starting idea. He drums out a bottle of Bombay Sapphire Gin, pours some in a plastic tonic bottle, shakes it into a rudimentary gin and tonic and places a UV bulb next to his concoction. The effect is mesmerising as the liquid glows blue and the translucent container becomes opaque. ‘A Sapphirean cocktail,’ Cocksedge defines it with irony.

At the moment, the Sapphire and Tonic light is not on show since Cocksedge is tweaking its glass shape. It will be, however, part of his first independent London exhibition, Snow White. By then, Cocksedge will have the additional kudos of being the winner of the Bombay Sapphire competition, so expect punters to be queuing at the door.

The Bombay Sapphire Blue Room exhibition is at the Geffrye Museum, Kingsland Road, London E2 until 11 January 2004. E-mail info@paulcocksedge.co.uk to receive an invitation to Snow White