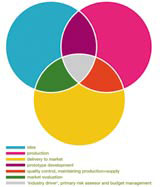 Start-ups’ lack of commercial acumen is real concern for a lot of people in design. Too many begin flying by the seat of their pants and never stop. It’s a persistent problem that colleges don’t seem to have rectified and Government is apt to overlook. Which is why Designersblock founders Piers Roberts and Rory Dodd have collaborated with intellectual property lawyer Briffa to set up business development initiative Risk It.

To its credit, Risk It doesn’t present some ‘get rich quick’ solution, but rather appears to be an altruistic attempt to offer constructive advice. While perhaps not the most comprehensive or best conceived business plan ever created, at least Risk It takes on the challenge.

Based on Roberts’ personal experience, Risk It is part theory, part service, but currently less of a packaged product than the name suggests. Roberts is open to anyone using his thinking if it encourages interaction and growth.

‘What we want to do is bring some of the specialist skills that have been delivered in mainstream industry to bear on more creative projects,’ he says.

Like many in design, he sees drawbacks for creative minds when it comes to planning and structuring small, independent businesses. Risk It offers a free brochure with case studies and simple legal advice that might help to convert ‘nice ideas’ into ‘good products and services’.

‘New businesses are falling at the same hurdles as older creative businesses, but the lessons are not being passed on. What they need to do is think of each project in terms of the [specific] roles and opportunities that exist,’ he explains.

‘Somebody who has creative ideas probably isn’t good at the other two central roles: manufacturing and delivery to market. So with this model you can start to work out what these roles would be in your situation, then think about how you can go about filling them,’ Roberts continues.

To be of any real use though, the theory does need to be applied, so Briffa is offering its services as a legal contract specialist and professional adviser. ‘Start by asking yourself, “What do you want to achieve?”,’ says Briffa founder Margaret Briffa, who has written the brochure’s case studies.

‘What’s good about Risk It is [that] it encourages creative businesses to take the initiative. There’s definitely a tendency in this sector to only ask for advice when you run into difficulty. The reality is that some careful planning will prevent problems in the future.’

Sound advice, but who would actually benefit from hearing it? TKO Design founder Andy Davey believes new design groups ought to be listening.

‘Risk It is obviously targeted at students, or recent graduates rather than established design consultancies,’ he says. ‘I reckon it will appeal especially to those who want to follow a designer/ maker/ Designersblock-type career.’

Phil Gerard, co-founder of the Digit breakaway All of Us, agrees. But he suggests the brochure might be hard for the commercially inexperienced to digest.

‘It’s very robust and very thorough as far as it goes, but for small creative businesses it’s probably overburdened with process,’ he opines. ‘It actually sounds very legalistic in parts as well. It’s a bit like a self-help book in the way it makes you think, “Oh, that’s an interesting idea”, but then you’ve still got apply the theory.’

Davey thinks young designers should stick with it, however. ‘The document would be especially valuable to students, as learning about business and legal parameters is obviously no longer part of the current design education curriculum,’ he says.

‘What’s worse is that universities are churning out this type of designer every year, so they leave with a big chunk of their required knowledge missing. In such a competitive field, any such assistance can only be a good thing.’

This educational aspect is something Roberts is keenly aware of. He says there’s been a lot of interest in Risk It from colleges, as well as a number of design industry bodies in the UK and overseas.

While any prospect of more commercial education should be welcomed, Risk It doesn’t answer all the questions faced by small businesses (cash-flow and financial decision-making come to mind). Nevertheless, if it manages to spotlight the unaddressed needs of small creative groups, Risk It can consider itself a worthy cause, even if in terms of scope and presentation it’s limited thus far.

The Risk It Biscuit

â€¢ Piers Roberts argues there are up to three key relationships at play in any creative project. By isolating each one, opportunities for growth and minimising risk will emerge

â€¢ Using a Venn diagram he calls the Risk It Biscuit, Roberts represents his three central factors – the idea, the market and manufacturing – as overlapping segments. The intersections represent the key inter-relationships, or roles, that he says are fundamental to most creative projects

â€¢ If you start to lay out these roles then people begin to see themselves in relation to these jobs and can get a clearer idea of where their strengths and weaknesses lie Source: Piers Roberts/ Rory Dodd/ Briffa