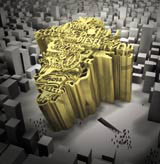 Frank Tjepkema’s modest Amsterdam studio is somewhat overshadowed by its neighbour, a skip and a hop across a cobbled courtyard off one of the city’s many canals. Thonik, a relatively high profile graphics group, is housed in a square building opposite, painted in headache-inducing, Holland-football-shirt orange. It’s currently the subject of a dispute between some non-orange-loving neighbours and Thonik founders, husband and wife team Thomas Widdershoven and Nikki Gonnissen.

Attention-grabbing, personal architectural statements like this aren’t really Tjepkema Studio’s style (the busy studio, where Tjepkema works with partner Janneke Hooymans, is squashed into a plain, whitewashed warehouse space), but when it comes to clients, it’s a different story.

One such statement is a project Tjepkema conceived for British Airways for Droog Design – an immense sculpture for the strangely unpublicised BA First Class lounge at Heathrow, which opened in the spring. Called Airco Tree, the sculpture resembles a giant spiral of stacked, fractured, white, gold-edged china plates with a central ‘trunk’, and hovers above a round glass table.

Last week, it won the interior design category at the Dutch Design Awards, alongside Vandejong’s posters for the Amsterdam film museum’s Elizabeth Taylor season, and the strangely named Staat’s identity for club and restaurant Jimmy Woo. Push Braces, practical medical bandages, won the Design for All category, designed by Waacs Design and packaged by Mountain Design.

But it’s the dapper, quirky Tjepkema which is currently the toast of Amsterdam, after scooping two gongs. The second, for the crafts jewellery and fashion category, went to a personal project at the other end of the scale. Bling Bling, created in 2002, is a gold medallion loosely shaped in a cross, dripping with overlapping brand identities. MTV, Diesel, Kleenex and Knorr can all be made out. It was shown at the Milan Furniture Fair in 2002 as a prototype.

As a social statement, it’s fairly simplistic – brands as the new religion. ‘It’s a very literal idea, which I got from reading No Logo,’ Tjepkema says. ‘But on an ironic level, wearing Bling Bling means you don’t need to wear any of the brands featured,’ he adds with a smile.

Airco Tree, ‘essentially a big piece of jewellery’, is not the only work Tjepkema has undertaken for Droog. Last year’s Signature vase, a 3D version of hand-scrawled signatures with holes for flowers, was preceded by a breakable vase, called Do Break. Do. It follows the principle of an eggshell, with a fragile ceramic shell and a rubber interior, enabling you to smash it up as much as you like. All very Droog, but it’s strangely therapeutic to squeeze.

‘The Signature vases are an example of the consumer dictating form, which is the opposite of Bling Bling,’ he says. Tjepkema enjoys the thought processes and socio-political statements behind his designs as much as the design process itself. It’s most evident in his personal projects.

For example, a forerunner to Bling Bling was a ‘communication’ project – personalised jewellery that could be given to each member of a family to celebrate the arrival of a new baby. There is one for each person – Grandpa, Brother, Uncle and so on. ‘It’s more interesting than sending cards,’ he says.

Personal projects, along with commercial work, form the bulk of the studio’s output, and it designs purely 3D objects, from jewellery to product design to interiors.

Airco and Bling were selected for last week’s Dutch design show in London, The Foreign Affairs of Dutch Design, and shared space with pieces by Dutch grandees such as Dick Bruna, Irma Boom, Studio Dumbar, Hella Jongerius and Marcel Wanders. Tjepkema may not be mentioned in the same breath as such stars yet, but the next wave of graphics studios such as Thonik and Dietwee, young rising star Bertjan Pot, and Tjepkema are all nipping at their heels.

Even Thonik’s orange HQ won’t be overshadowing Tjepkema for long. Thonik’s Widdershoven e-mails to update me on the dispute: as a compromise, it is re-painting the building next May, in green or blue.

Little Chef will keep his paunch

Simplify products – be sure that they cut it first though