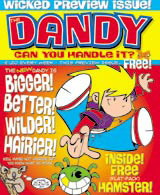 Children’s comic The Dandy is to relaunch next week with a new design and additional characters. The changes come after research by the title’s publisher, DC Thomson, found that the magazine was struggling to ‘make itself heard’ with the target audience of seven-to-11-year-old boys. One of the comic’s principal characters, Desperate Dan, also gets a makeover – a nip and tuck to tone his body and a more chiselled jawline. Debut characters, designed to ‘inject new life into the editorial’, include Dreadlock Holmes and mischievous schoolboy Jak. Designs for the new-look Dandy were overseen in-house by lead artist Bruce Robertson. The relaunch will be supported by a £600 000 national advertising and PR campaign.