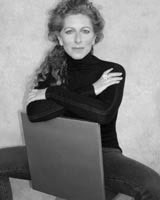 In the world of high-street homeware permeated by supposedly soothing scented candles and comforting mohair throws, Kelly Hoppen and Tricia Guild stand head and shoulders above their peers. If interior decoration was once the province of elitist designers catering to the aristocracy and upper middle classes, Guild and Hoppen have helped democratise both with their affordable homeware. Some will scoff that it is execrably safe. But there’s no denying that it’s both in ‘good taste’ (albeit in a very conventional sense) and affordable.

It helps that Guild – colourist extraordinaire – and Hoppen – purveyor of taupe suede cubes and artfully arranged orchids (shorthand for Far Eastern chic) – are media-friendly celebrities (the glossies have gossiped no end about Hoppen’s romance with footballer Sol Campbell.) But their image is also part of their brand: interestingly, these arch-rivals have big hair to match their big personalities: Hoppen is synonymous with her Titian bird’s-nest hairdo, Guild with her corkscrew-curled barnet.

Somewhat removed from this populist – and commercial – approach to design are a whole host of interior design groups, among them HMKM, Universal Design Studio and Wells Mackereth. But how do these view Hoppen and Guild? Do they feel they can learn anything from these high priestesses of high street design, who know how to market themselves, and then some? Do they feel that these two are pushing the boundaries of design or, on the other hand, cynically peddling mass-market goods?

Architects tend to inhabit a more rarefied world than Hoppen and her ilk. For a start, working as a team, architects’ individual personalities – and egos – take on less importance. And their approach to design is more analytical and cerebral. They are unlikely to stoop to the reductive language used in the press release trumpeting Hoppen’s forthcoming book The Golden Rules of Design, which unashamedly bills itself as ‘The perfect coffee-table book or gift for Christmas’. Hoppen, it says, ‘combines inspirational room shots with a simple explanatory text, enabling the reader to achieve the perfect result’, a statement that, like the book’s title, can be read as crudely prescriptive.

Hoppen’s hard-sell patter and down-with-the-people stance are, to many architects, distasteful and vulgar, although some concede that she deserves credit for popularising design.

‘Along with TV property and home-makeover programmes, Hoppen and Guild have raised awareness of design,’ says Jonathan Clarke, director of Universal Design Studio, whose projects include Stella McCartney’s London and New York boutiques, and Skandium in Selfridges, London. ‘This is making high-street design more aspirational. References to high-end brands filter down into the high street much more quickly these days.’

But the consensus among architects is that their inspirations are more subliminal and intangible than those of Hoppen and her ilk. ‘We’re influenced by a general cultural mood, a combination of films, fashion, TV programmes, music, and the economic and political climate,’ says Peter Kent, a director at HMKM, which recently designed display units for Habitat’s new Very Important Product range of goods, created by celebrities to mark the store’s 40th anniversary. (Other projects include Wedgwood’s flagship London store and the lingerie department of Galeries Lafayette in Paris.) ‘Hoppen and Guild trade on narrower frames of reference. They are about building a strong, recognisable style. Hoppen, for example, has managed to mass-market that whole Zen look,’ Kent notes.

HMKM’s approach to design differs radically from that of its more populist, personality-based counterparts, he says: ‘We get into the spirit of a brand when we design its retail spaces. We don’t stamp our identity on them.’

‘Where Guild and Hoppen look for inspiration, and where we look, are completely different,’ says Clarke. ‘Their vision is very theme-based – focusing on a specific visual reference like a Moroccan palace, say. Our ambition is to be more abstract, less obvious.’

Sally Mackereth, founder of Wells Mackereth, which designed the interiors of London’s Smiths of Smithfield restaurant, Scout Gallery and London’s Pringle store, says architects like herself ‘go back to first principles when designing a space’. Mackereth adds that whereas the likes of Hoppen take an a priori approach to each project – deciding early on to use one material, or a mood-board as the starting point for the entire design – hers isn’t predetermined. ‘We begin by asking the clients lots of questions to get to the heart of what they want,’ she explains. ‘With Pringle, this led to a discussion on how we could convey the wilds of Scotland on Bond Street. This got us talking about Scottish artist Andy Goldsworthy and his concern with taming nature, and led to our decision to use a fossilised stone in the shop’s interior.’

Mackereth defines Hoppen’s style as ‘orchids all growing at 60º angles in groups of three on dark walnut shelves. The look works well in posh, polite international showhomes and slick property magazines. Like the Conran restaurants, it’s nice but hardly ground-breaking. Hoppen’s a brand, a celebrity, a household name like Martha Stewart. I was shocked to see she advertises in Vanity Fair. And she was on Radio 4’s Start the Week recently, saying, “Clients come to me because they’ve seen their friends’ ski lodge in Gstaad designed by me. They know what they’re getting with Kelly Hoppen”.’

But don’t all architects and designers have a handwriting, however discreet? ‘Yes, but ours is hard to pin down,’ counters Mackereth, who, incidentally, is planning to co-design a range of homeware with Bill Amberg. ‘All I’d say is that we use materials in unorthodox, playful ways.’

Even so, say Mackereth and Kent, a recognisable handwriting isn’t necessarily something to be ashamed of. They both respect John Pawson, for example, for ‘his clear, identifiable style’. Kent also praises Jasper Conran for his Wedgwood ranges: ‘Like his father, Jasper has the people’s touch. He can do very good design without threatening anyone.’ Meanwhile, says Mackereth, ‘What Tricia Guild has done with colour is no mean feat. She’s the [fashion designer] Matthew Williamson of interiors.’

As for Guild and Hoppen, both profess to being influenced by architects. In her forthcoming book, Private View, Guild cites as major inspirations Luis Barragan, Frank Gehry and IM Pei (architect of Paris’s Pyramide du Louvre). While it’s perhaps hard to see how the last two have influenced her, Barragan and Guild clearly have something in common – a taste for strong colour. ‘It is often thought that minimalist architecture has to be devoid of colour, but he [Barragan] embraced both,’ she writes. ‘Barragan’s daring use of colour has made me more confident in my approach to colour… There is an assumption that you can’t use colour in a northern light, when in fact we need it more!’

Hoppen, for her part, says that she always learns something from architects ‘on every job I do’, chiefly from their ‘spirit and experience’. But, she believes, it’s a two-way street: ‘My books have had a big influence on interiors. I’m often surprised to see them in architects’ offices as far [afield] as Russia. I try to do a book every couple of years that captures the look of my work and shows where the brand is going. My whole philosophy and products are very simple and easy to adapt to all lifestyles. I think this is what people like and strive for.’

The Golden Rules of Design by Kelly Hoppen is published by Jacqui Small on 30 September, priced £30

Private View by Tricia Guild is published by Quadrille on 1 October, priced £20