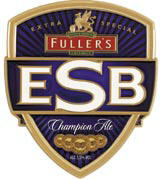 ESB – or Extra Special Beer – will lose its existing black and red circular marque, which will be replaced with a bold gold and royal blue shield. The livery will be applied to all bottle-labelling, as well as 3D pump clips for the hand-pulled product available in pubs and bars.

Fuller’s brands marketing manager David Spencer says that ESB needed a fresher identity in order to reach a broader audience. ‘We want to get the beer more widely known and looked at a number of ways to sum up what the brand is all about,’ he explains. ‘The phrase Champion Ale seemed to get to the heart of it better than any other.’

Parker Williams was awarded the project a year ago, without a pitch, on the basis of its five-year relationship with Fuller’s. It is also working on ‘various other projects’ that will be launched in the coming months, according to Spencer.

The packaging rolls out from 1 October, supported by a national advertising campaign and point-of-sale promotional material.

Put your letter heads together