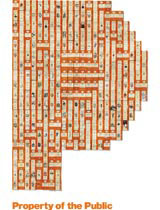 Writers group 26 and the International Society of Typographic Designers have joined forces on a study of the individual letters of the alphabet. A writer has been randomly paired with a graphic designer, each pair exploring a letter together and developing words and an image respectively.

Much of the interest in the 26 texts lies in the illuminating, minute observations they make about things every writer takes for granted: letters. Writer Charlotte Rawlins, working with designer Morag Myerscough, disputes the letter C’s perceived lack of function in English. ‘If C is [considered] redundant because it can be replaced by the hard K and the soft S, isn’t it equally interesting for the same reason?’ she argues.

Later, she draws attention to C’s ‘naughtiness’ as the C word, and it’s this that Myerscough chooses to dwell on in her disappointing design: ‘Has anybody seen Mike Hunt?’

Elsewhere, designer Lucienne Roberts refers to the ‘hard-working’ letter E, while her partner, writer Tom Lynham, picks up on the obvious references of the letter to the drug, Ecstasy. ‘It’s the only letter of the alphabet that stands for an entire culture,’ he writes.

Writing about the letter I with Derek Birdsall, Design Week columnist Jim Davies discovers the dot is called a ‘tittle’; and writer Mark Fiddes and designer Christine Fent suffered from ‘B-ness envy’ when they realised how many of their ‘heroes’ had surnames starting with B.

But for graphic designers, copywriters and creatives, the book and exhibition are a welcome, intelligent study of 26 of the most important squiggles in our culture.

26 Letters: Illuminating the Alphabet, edited by Freda Sack, John Simmons and Tim Rich, is published by Cyan and is available now, priced £14.99. The posters will be placed around the British Library from 29 September to 1 January 2005

Simplify products – be sure that they cut it first though