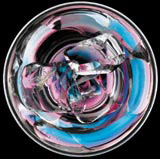 Sea is creating a brand identity for Oqo, a Chinese tapas bar that is scheduled to launch on London’s Islington Green later this autumn.

The consultancy won the five-figure project in April on the back of its relationship with Hawkins Brown Architects, the practice which is responsible for the restaurant’s design and interiors.

Sea’s involvement encompasses the name-generation of the bar and the creation of an identity that will be applied graphically to Oqo’s facia, promotional materials, stationery and menus.

The brief for the consultancy was to create a branding scheme that would be robust enough to roll out across a chain of Oqo bars, according to Sea creative director John Simpson.

‘A lot of bars have great concepts, but do not have great brands. Oqo’s owner [restaurateur Mark Chan] wants to open a few more bars throughout the country, and to be able to take the branding right through,’ he explains.

The venue’s identity plays on the three circles that make up Oqo’s name, which is an invented word.

‘All of the graphics reflect circles. We’ll have huge panels hung around the bar that are photographs of cocktails as you look down on top of them, taken by photographer John Ross,’ says Simpson.

Oqo is set to open in November and will boast a minimalist interior scheme with brushed concrete floors and a 12m-long veneer bar with an embedded light source.

Don’t work for free, but try to put something back