Nova magazine ran through two particularly tumultuous British decades: the 60s and 70s. From 1965 to 1975, the women’s glossy covered current affairs and fashion, and tackled taboo subjects like homosexuality, race and abortion. At the time, it countered the typical view of what a women’s magazine should be; there were no recipes or knitting patterns. And the visual output was as high-reaching as its written content: it showcased photography from Terence Donovan, Helmut Newton and Diane Arbus as well as illustrators and artists like Alan Aldridge, Peter Blake and Roger Law.

Just released in its second edition is Nova 1965-1975, which charts the magazine’s “brief brilliance and lasting legacy”, according to the book’s editor David Gibbs. We speak to the magazine’s art editor from 1969 to 1975, David Hillman, about designing the sometimes-controversial magazine, his favourite covers and the “awful” state of contemporary British magazines.

Design Week: The book highlights the strong visual elements of Nova — can you tell us about the design process behind creating these?

David Hillman: One of the most important things was how it was done. There’s a tendency for writers to solve problems with words and designers solving them with pictures. I was very lucky to also be deputy editor, so I was more involved in the content of the magazine than most art editors. When an article was discussed, the hardest thing to do was to convince a writer that although it’s a great story, the best format would be a photographic essay rather than 5,000 beautifully written words. So the first discussion I would have would be whether it would be a picture essay, an illustration, an article, or all three. I had come from the Sunday Times, who were the instigators of the picture essay, where the whole concept was that the pictures could stand alone with just a well-written caption that shouldn’t describe what was going on in the picture.

DW: Some of those captions and covers highlight serious issues. One depicts a young black girl with the question: ‘You may think I look cute but would you live next door to my mummy and daddy?’

DH: It’s interesting that the editor at the time, Dennis Hackett, was an ex-advertising man. He was good at writing those snappy lines that most journalists struggle with. Humour, good news, bad news, death, life, whatever — we always wanted a good balance — but there couldn’t be doom and disaster on every spread. And sometimes the strongest editorial idea wasn’t the best visual cover for grabbing readers.

I went through a period where the easier thing to do was just run fashion covers because you don’t have to work hard at it. But I managed to persuade the team that we shouldn’t go with necessarily the heaviest hitting story, but the one that made the best cover. Sometimes you can get a really nice cover out of a story but it only runs two pages inside. 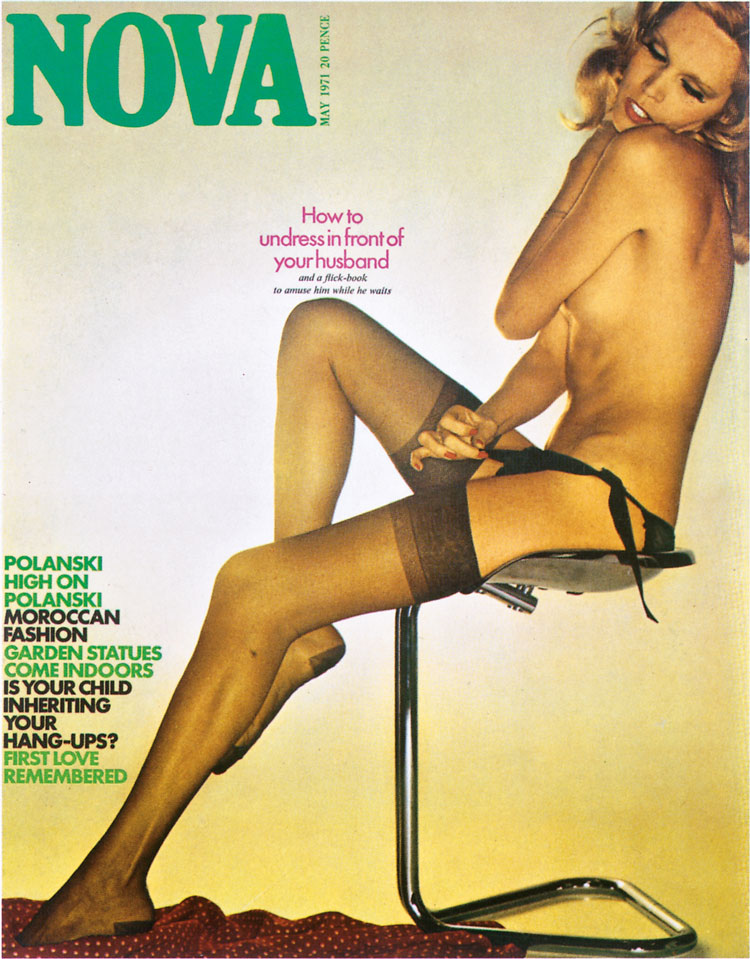 DW: Other covers are quite provocative — did that ever raise any issues?

DH: The problem we always had was that we had a conservative management and they never really understood Nova magazine anyway. There was one particular story, called ‘How to undress in front of your husband,’ which was a way to get good underwear in the magazine — though the idea came from a woman so it wasn’t just my idea to put erotic pictures in the magazines. But it was a major story, and it was obvious to put on the cover, but you can imagine when it’s raised in an editorial meeting that management always see the worst side of the story.

DW: Did those covers sell well?

DH: I don’t think we ever had a cover sell out. One of the best selling covers that I heard about was the Brigitte Bardot one, with a picture of her on a newspaper tear out with the cover line: ‘If she gives up, what hope is there for the rest of us?’ If I could have done that every issue, they’d have been extremely happy.

DW: Text is just as important to the covers as imagery. How did you create the Nova tone of voice?

DH: Well, we didn’t come from the Helen Gurley Brown school where you had to have 400 cover lines. I was totally opposed to that. All it does it make everything messy and nothing stands out. One issue we don’t talk about enough is that a lot of people bought magazines on a regular basis. They had it reserved at a newsagent, so we felt that it wasn’t necessary to work that hard at it. But writing a good cover line is as exciting as taking a good photo or doing a good layout. So it all works hand in hand.

DW: It’s not just underwear on the cover — there are children and families, which is indicative of the changing family dynamics Nova discussed.

DH: Some people have said that it was a male-dominated magazine. Admittedly, it had three male editors and one female editor, though the female editor, Gillian Cooke, lasted five years and the men lasted months. The rest of the team — apart from me, the assistant editor, a designer and a couple of staff writers — were women. Around 15 out of 20 people. It wasn’t a women’s magazine run by men.

We knew that it had a high male readership, which I took as a compliment – we had gone beyond everyone’s conception of what a woman’s magazine was. I think one of the mistakes at the time was that they ran an advertising campaign featuring men, and the public then weren’t as sophisticated as they are now at understanding that sort of satire. Having that reputation also had its downside: the advertising industry — media buyers — always pigeonholed magazines. Vogue got all the fashion, Esquire got all the motoring, and Nova sat in the middle, so we didn’t have any ads at all.

DW: In terms of lay-out, what came first: images or the writing? Did you ever start from a visual?

DH: Not so much on the outside. But inside, yes. One day I suddenly had an obsession with making a large plastic onion, and we thought it would make a good image, so I went to Prue Leith, who was cookery editor then, and she said okay, “I’ll write the article.” There wasn’t always an intellectual way of arriving at something, sometimes it was just a good idea at the time.

DW: It seems like you had a free platform to explore that creativity.

DH: One of the nice things about being outside the normal confines of a woman’s magazine meant that we had a freedom to experiment. We were wrong as many times as we were right. But if you don’t take risks, you don’t move on. You end up like Woman’s Own.

DW: Graphic design is key for Nova. What role did that play in designing the magazine?

The basic premise was if you can’t photograph it, you draw it. But certain things you did, the photographers got annoyed about. One time, Celestino Valenti did an underwear illustration of a model in underwear on a table with dogs. Our photographer, Hans Feurer, said: “Why did you give that to an illustrator? I could have done it.” And he could have done it, but he wouldn’t have gotten everything into focus, and everything had to be pin sharp. It’s the idea that not everything has to be photographed. That’s why Roger Law became very important to me; a marriage of photography, illustration, model-making and satire.

DW: Are there any covers you’re particularly proud of?

DH: The cover with the legs with the fringe on was one of my favourites because it wasn’t a face, although it didn’t go down too well with the people in power. That was very beautiful, and it really stood out on a book stool.

I’ve always liked how to undress in front of your husband. And the one with the woman’s head with a head superimposed with a cabbage. Another favourite was a fashion cover we did with a model in an army hat. I liked that because it was anti-fashion.

Only once did we have an illustration on the cover, and it was Twiggy shaving her armpits – it was part of a feature we ran based on what you don’t expect famous people to do. For that reason, it had to be an illustration but whether it was any good as a cover or not is another matter. 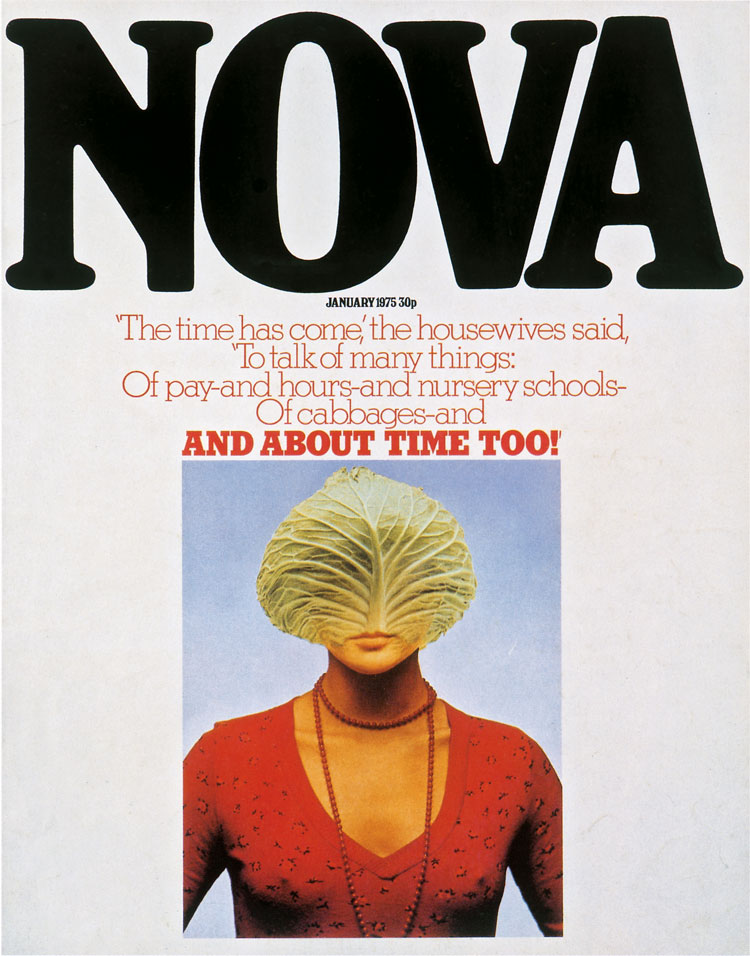 DW: Do you think a magazine like Nova has a place in today’s market?

DH: When they relaunched Nova with the same name (in 2000, for 13 issues), you cannot believe the expectation that came out from some people. And what came out was bloody awful, so I’m not surprised it didn’t last long. It was the perfect example of all style and no content.

The most depressing thing is walking into a magazine shop and there’s no visual inspiration on any of the covers. You want to stand out, not meld into the background. A good trick is to work out if you can tell the difference between any of them when you cover the mastheads. The state of magazine design in this country is awful now — mostly because the editors and art teams have lost control. They’re being run by the advertising departments. I understand you need advertising to pay for the magazine, but at what expense? Publications that won’t upset anyone, and only make people feel good about themselves?