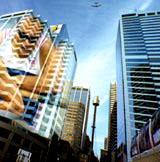 BBC Resources has designed and produced the title sequence for the BBC’s coverage of Olympics 2000, which begins on 15 September.

“In the Botanic Gardens a boy can be seen throwing a model aeroplane,” explains a BBC Resources spokeswoman of the sequence. “As it soars through the sky, pictures of famous athletes are projected on to Sydney’s buildings. People look upwards in awe of the excitement which is taking over the city. They are swept up by ‘Olympic fever’.”

The sequence culminates with a shot that pulls back from the Sydney Opera House to reveal the TV presenters in their virtual studio.

The London group was appointed after a 14-way pitch last December and has designed graphics that will be used both on-screen and off-screen during the next three years.