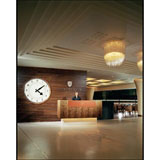 Arsenal opened its luxury members club, the Diamond Club, at its new 60,000 seat stadium last week, with interiors designed by 20/20.

The 1000m2 space will host 84 members and their guests for each game. Along with a lounge, bar and restaurant run by chef Raymond Blanc, members have access to valet parking and a concierge service, and can travel to European away matches on the players’ plane. Members pay a joining fee of £25 000 plus £25 000 a year for a minimum of three years for the privilege.

According to 20/20 managing director Jim Thompson, the group was briefed to create interiors that resemble a private members club that is ‘not corporate in any way’. ‘Members are very rich people with very high expectations. We needed to create services and an environment that reflected that,’ he says.

The group has chosen a 1930s motif for the space, with a ‘modern twist’, Thompson adds. ‘We decided to capture and update Highbury’s original Art Deco architecture,’ he says. ‘There is nowhere in the new stadium that replicates that and it was a suitably opulent era.’

Along with an illuminated 6m onyx bar, the group has chosen ‘expensive finishes’, with materials including a sustainable, eucalyptus floor; specially commissioned rugs in an Art Deco style; and slatted and soundproofed walnut walls. Marquetry in walnut inlaid with oak is used extensively throughout the space. Bespoke lighting for the club was designed by Kate Wilkins.

The heritage of the Arsenal brand is also evident throughout. At the entrance lobby, a 3m bronze cannon, the Arsenal marque, has been set into a white terrazzo floor and a replica of the South Stand clock adorns the space. A ‘strong graphic theme’ runs through the club, says Thompson, with stories illustrating moments in Arsenal’s history inlaid into timber panels around the room.

The group was appointed to the two-year project without a pitch on the strength of previous work for the club, which includes the design of retail facilities and offices at the new stadium, plus the latest version of the Arsenal identity (DW 7 February 2002).

• Designed by HOK Sport, the overall project cost was £390m

• Along with a 1000m merchandising megastore, there are 150 executive boxes, 250 catering points and more than 900 toilets in the stadium