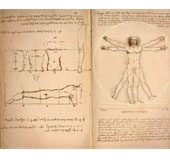 The V&A’s exhibition of Leonardo da Vinci’s sketches will be accompanied by animation that uses 21st century technology to give a deeper insight into the artist’s work, says Yolanda Zappaterra

Given the way in which curators remain in thrall to entertaining younger visitors at the expense of adults, you could be forgiven for having a sinking feeling at first sight of the Victoria & Albert Museum’s latest blockbuster, Leonardo da Vinci: Experience, Experiment and Design. Opening next month, it brings together 60 Leonardo da Vinci drawings and sketchbooks for the first time, dramatised by nothing more than several large-scale models of his designs and a small number of animated films. Exhibition design by Stanton Williams, animation by Cosgrove Hall, sophistication and understatement throughout. Hallelujah.

But before we crack open the champagne and head for London’s South Kensington, let’s delve deeper into those animations. They are a series of films related to the four central themes of the exhibition: perception and proportion, microcosm and macrocosm, force, and design. As it turns out, these beautiful animations are a cause for celebration, not only complementing the works in the exhibition but adding a dimension that should heighten the visitor experience. 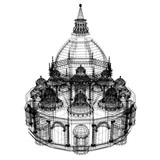 Motion graphics in exhibitions is of course not new; the recent and hugely popular Michelangelo Drawings: Closer to the Master show at the British Museum used projections to good effect, and most exhibitions incorporate mini-cinemas showing at least an old BBC documentary about the artist. Steve Maher, lead animator at Cosgrove Hall, is fresh from a time trip of a quite different nature – he has just recreated two lost episodes of Dr Who as animation for the BBC. And the animations Maher has created for the Leonardo drawings have a relationship with the artist and his drawings that is as right as Fred Astaire and Ginger Rogers, Arsène Wenger and Arsenal or Big Brother’s Chantelle and Preston.

Maher’s animations use Leonardo’s sketchbooks as their basis, and in a deceptively simple way do two things brilliantly. They bring to life Leonardo’s incredible sketches of everything from futuristic war machines and human anatomy to mathematical thought and natural phenomena. They also vividly illustrate the complex thought processes behind these ideas – in much the same way the sketchbooks do. Maher was very keen to get this aspect of Leonardo across in the animations because, he explains, ‘One of the special things about the notebooks is that a single page may contain a meticulously observed anatomical drawing, next to a completely unrelated scribble on a scientific subject, next to a stylised preparatory sketch for a painting, all overlayed with mirror script. They are diverse but cohesive – the look of the animations is entirely taken from that ideal.’ 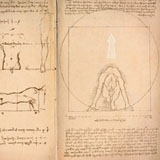 Maher’s greatest challenge lay in working almost exclusively with Leonardo’s work: ‘This is an exhibition of Leonardo’s work and so it seemed obvious that the art director of the animations should be Leonardo. The potential was there to indulge ourselves in all manner of fly-through effects and realistically rendered computer models of inventions and architecture, but that was explicitly not our intention. We wanted to be as unobtrusive with the work as possible, for the animations to give an impression of Leonardo’s thoughts coming to life on paper via his hand. There is always an element of interpretation when you are turning a single still drawing into an image moving at 25 frames per second, but we tried as hard as possible to make our additional work as invisible as we could,’ he says.

Maher has succeeded amazingly well; looking at the animations – which are a combination of 3D Studio Max computer modelling software, digital vector-based drawn animation and traditional hand-drawn animation techniques – you would swear they are simply Leonardo’s drawings come to life.

To achieve this, Maher had to scour 20 000 pages of originals, so the resulting films incorporate many elements of drawings that are not in the show, although, as Maher says, ‘There was always an attempt to include parts from works in the exhibition in each of the animated sequences, to refer to them directly.’ The incorporation of so much Leonardo material appears as a seamless visual narrative, which is not so surprising because, as Maher says, ‘Leonardo does share many of the preoccupations of the animator – the analysis of proportion and anatomy, the formalised notation of the shapes the mouth makes in speech, capturing movement in a sequence of drawings – in his thumbnails of the hammering man, for instance, Leonardo provided us with the key frames, our job then was to fill in the in-betweens to create more fluid animation.’ 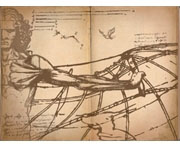 Maher has certainly done that, but in these animations, he has also created a tool which offers insights that would simply not be possible by looking at the drawings alone. ‘In the animation based on the diagram concerning the effects of light falling on a face,’ he explains by example, ‘we are able to demonstrate the points contained in the original without it being necessary for the viewer to have access to a translation of the mirror writing that explains it,’ says Maher.

He and the exhibition team should be applauded for delivering such an accessible, elegant solution to a problem of universal appeal.