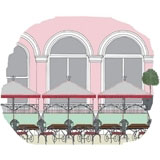 London’s restaurant scene is to be enlivened by a series of openings this autumn, including The Wallace, Oliver Peyton’s latest restaurant, which opens at the Wallace Collection next week.

Situated in the heart of the museum’s Sculpture Garden, it features a glass roof and interiors designed by Shaun Clarkson. Interiors were inspired by Parisian courtyards, says Clarkson, and pay homage to the gallery’s extensive collection of 18th and 19th century French works. Diners will sit under parasols and pathways will create ‘intimate corners and private spaces’.

Clarkson has employed a colour palette of pale turquoise and soft crimson and vignettes will be evident in embroidery on the parasols, place mats and linen cushions.

Along with the bespoke wire furniture, there are oak tables and a specially commissioned 6.5m oak-panelled and marble-topped servery that will display the dishes from the all-day menu. A more formal Ã  la carte menu, offering contemporary French cuisine with a focus on fish, will also be available.

This is Peyton’s second museum-based restaurant venture, after his National Dining Rooms at the National Gallery.

Meanwhile, Clarkson has designed interiors for Club Bar & Dining, which opens this week on London’s Warwick Street. The venue is split over two floors – a ground floor dining room open all day and a lower ground floor cocktail bar, open only in the evening.

Features on the ground floor include exposed brick walls, timber floors, a colour palette of ‘green hues’ and tan leather seating; all of which are designed to give the space an ‘established’ ambience, according to Clarkson.

Three large booths are the focal point of the space and diners can also sit at wooden tables on butcher block stools. Lighting consists of skylights, candelabra on tables and a large brass chandelier.

Downstairs is modelled on an ‘exclusive hotel style bar’, says Clarkson. Dark purple walls are enlivened with a floral pattern and the room features low-level, fuchsia pink leather furniture. The bar is edge-lit with pink fluorescent tubes to give a ‘dark, sexy edge’, according to Clarkson.

‘It’s more about high-level eating upstairs and sexy lounging downstairs,’ he says. The venue is a joint venture between Crystal Palace FC chairman Simon Jordan and Soho bar operator Brenhan Magee. Clarkson was appointed to the project on the strength of his previous work. Among his recent projects are The Pigalle Club and Cheyne Walk Brasserie in London.

â€¢ First it was shops, then cafÃ©s, now museums and galleries are waking up to the potential of restaurants within their walls

â€¢ The Tate Modern’s seventh floor restaurant offers views across the river to St Paul’s for breakfast, lunch and dinner