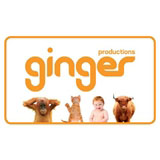 The SMG-owned business is aiming to shake off its associations with Chris Evans, its founder and host of Ginger-produced shows Don’t Forget Your Toothbrush and TFI Friday.

According to Elmwood Edinburgh managing director Nick Ramshaw, the consultancy was briefed to lead people to ‘think about Ginger differently’. The chosen solution uses images of three animals and a baby, each with ginger hair. It moves away from the previous marque, which was ‘almost identical’ to the TFI Friday identity, according to Ramshaw.

Elmwood won the project without a pitch on the basis of its previous work for SMG, including the rebrand of STV (DW 1 June).