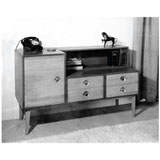 With London slowly gearing up for 2012, the somewhat forlorn hope is that the Olympics can again spawn aesthetic innovation – or at least coherence – comparable to the Festival of Britain in 1951.

Its centrepiece, the Royal Festival Hall, is in the throes of an awkward revamp by Allies and Morrison, which adds layers of competing and conflicting Modernist styles to a building that really doesn’t need them. Perhaps a little more understanding of design history might have been in order.

Ernest Race was one of the designers who became well known as a result of the Festival of Britain, and the Antelope and Springbok chairs he designed for it are now seriously collectable. So it’s no coincidence that the only book dedicated to Race (published in 1982 by the Design Council, and itself a collectors’ item) should now be reissued by a furniture dealer, Graham Mancha, in his first venture into publishing. 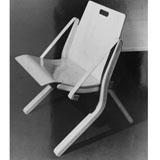 The book is identical to its original run, with the exception of the removal of the Design Council’s logo, as it curiously no longer wishes to be associated with the project. It’s not a glossy affair, but a real treat for anyone interested in British design of the 1940s and 1950s. It might also be informative for those revamping some of our design heritage, and for those wishing to make a future contribution.Ernest Race by Hazel Conway, published by Graham Mancha, price £15