Notting Hill Carnival is a staple of the late British summer. But like so many other events around the country, this year’s edition was cancelled because of the coronavirus pandemic. Wanting to still mark the occasion, music streaming platform Spotify partnered with a team of creatives to move festivities online.

A dedicated microsite was developed and designed by London-based creative studio Paq Works, to house a range of carnival-related content, from podcasts and playlists, to galleries and virtual events. The project took some eight weeks to deliver, according to Spotify and included building 42 separate identities for the sound systems and DJs of the “Carnival Sounds”.

The design language of the Carnival Sounds seeks to position these sound systems and DJs – playing the likes of dub, reggae, house music and more – as the “life of the party”. This looks was expanded as the brand identity for the whole site, and was supplemented with typography and a colour palette inspired by “vintage event posters from the Caribbean”. 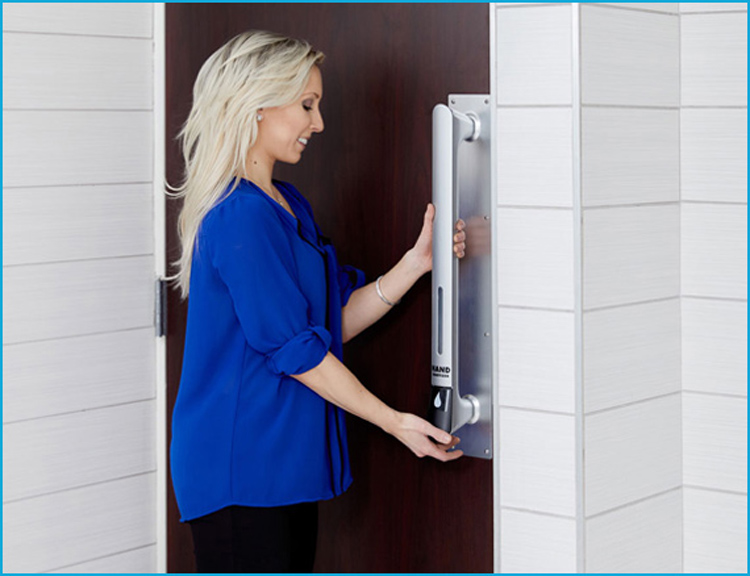 Awareness of how surfaces can aid in the transmission of viruses feels hardwired in many of us as we continue to navigate the COVID-19 pandemic. But while we can avoid touching some surfaces, others, like door handles, are markedly harder to do without.

Two Oxford academics wanted to address this fact. PullClean is a design that integrates a hand sanitising station into the functionality of a door handle. It works by inserting a tube-shaped cartridge into the centre of the door handle. When the door is pushed, hand sanitiser is dispensed at the bottom of the handle.

The product replaces the door handle in its entirety, with the company saying it can be accommodated by “virtually any bathroom or lavatory door”, as well as hallway and office doors. With the country tentatively beginning to reopen its businesses and public spaces, OpenClean says its PullClean solution can help to make hand sanitising more “intuitive”, while also providing education on “Critical Contamination Points” (high traffic areas where virus transmission thrives).

Flags Without Blood, by Oil

“Nations should not be defined only by their conflicts,” says Oil, the creative team behind the Flags Without Blood project. According to the team’s research, 64 of the 193 members of the UN carry references to blood or violence in their national flags, often through the inclusion of the colour red. This high number prompted Oil into action. Flags Without Blood seeks to redress this trend by reimagining what different nation flags would look like without these references. It is an ongoing project, the team says, and so far, the initiative has covered the likes of Lithuania, Laos, Yemen and Ecuador.

The process of redesigning the flags is different for each country and some of the final designs are the result of a relatively light touch. Laos’ reimagined flag, for example, removes the red stripes and makes the moon shape at the centre more prominent. This promotes other elements of the country’s history.

Other flags have been rethought entirely – the team’s interpretation of the Yemeni flag does away with the black and red stripes (considered to be symbols of blood and mourning) and instead includes two intersecting zig-zag lines which represent the Shiites and the Sunnis, in an attempt to showcase a “shared future”.

The hope is simply to draw attention to the issue and encourage discussion. 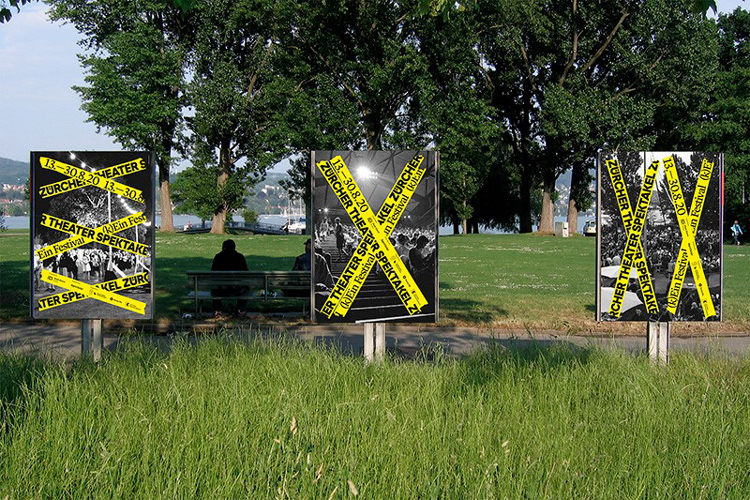 When the Swiss government banned major events to stop the spread of the coronavirus back in April, plans for Zurich’s annual summertime theatre festival were already well underway. Rather than cancelling it completely, organisers came to a compromise – the 41st edition of the event would go ahead, but in a markedly different format that involved decentralising it throughout the city.

With this new approach, new communications and touchpoints needed to be devised to ensure visitors, usually in their hundreds of thousands, could still navigate the festival. Studio Marcus Kraft was brought in to design these elements. Riffing off the image of caution tape which has plagued many public spaces as authorities seek to enforce social distancing, the team has created an eye-catching design system.

Scenes from past editions of the festival are shown, which are “guaranteed” not to happen this time around, the studio says. These have then been crossed out by the caution tape bearing the alternative dates and arrangements. The claim emblazoned across the caution tape translates from German as “(Not) A Festival”. 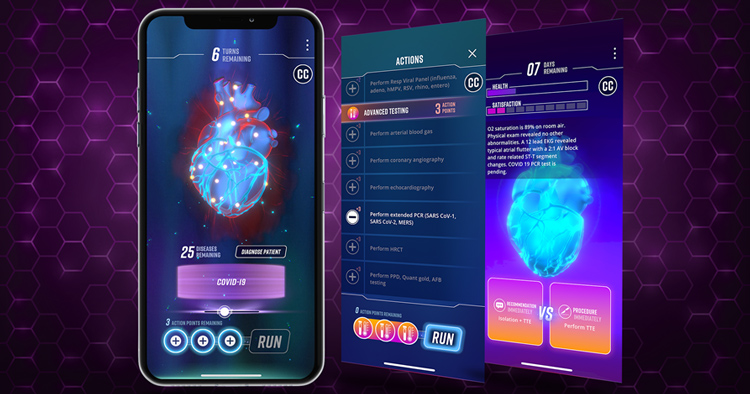 Last month, Design Week covered the increasingly frequent use of video games in patient-facing healthcare practices, but the benefits of video games can also be reaped by doctors-in-training, such as with this coronavirus-themed game designed by studio Level Ex.

Seeking to better distill and disseminate the latest actionable COVID-19 information, the coronavirus levels added to the studio’s Cardio Ex game provide healthcare professionals with the ability to test and experience scenarios relating to the pandemic. These concepts can include cardiac manifestations of the virus and comorbidities. Doctors play through the levels via their smartphones, so that they can reinforce their knowledge in an engaging way.

At a time when cardiac issues are rising from COVID-19 complications, the studio says designing these new levels was “a no-brainer”. 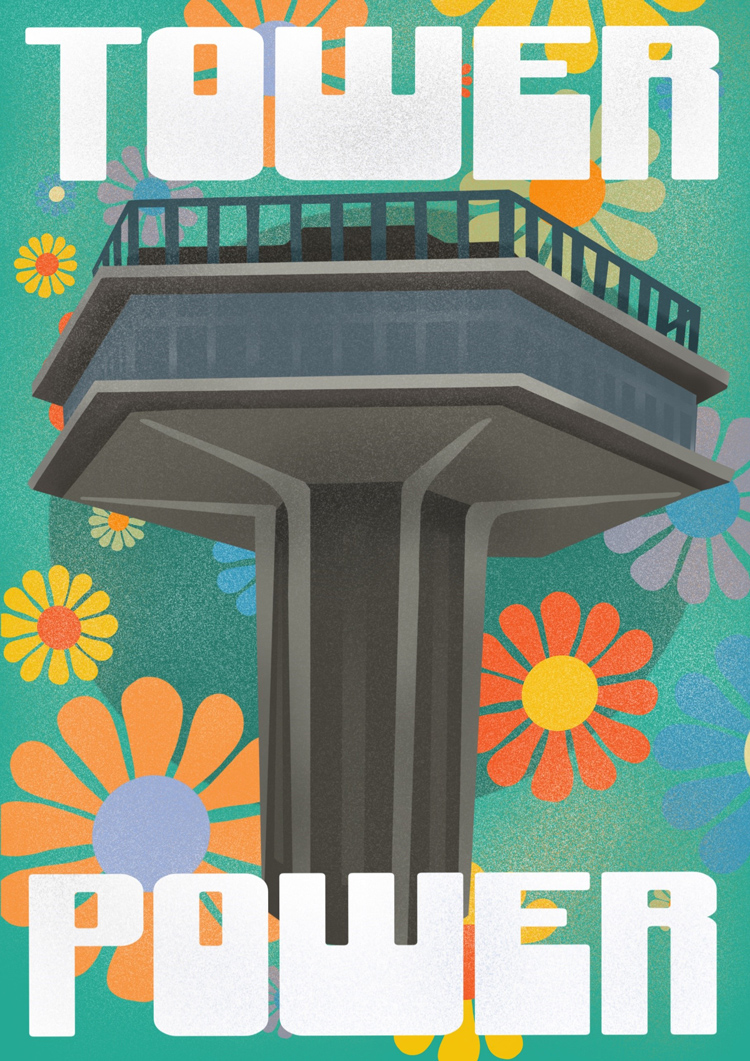 In 2020, “staycations” are booming. And with more Brits hitting the road in a bid to swap out exotic breaks for holidays closer to home, service stations are in the spotlight. They are, after all, an integral part of many holidaygoers’ journeys.

Despite their utility, service stations aren’t known for their creative allure and the team at Manchester-based Code Computerlove wanted to change this. Working for client JCT600, the studio has given some of the country’s service stations a 1960s-inspired psychedelic rebrand.

The work is replete with flower power motifs, trippy graphics and bold colourways applied to the likes of roadside restaurants, petrol stations and overhead bridges. 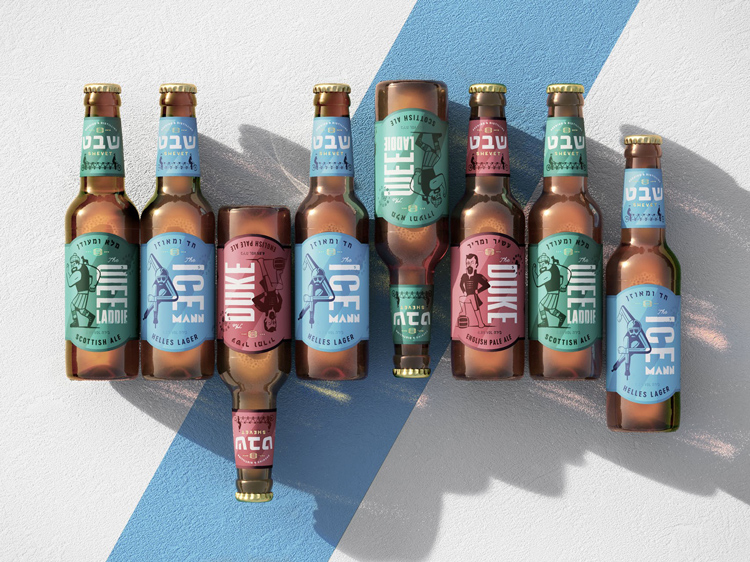 Aiming to capture Israel’s “expanding craft beer scene”, Butterfly Cannon has created the identity for Shevet Brewing and Distilling Co. The company houses a brewery and whisky distillery under one roof.

The identity for Shevet combines English elements with Israeli provenance, the studio says. The wordmark is “strongly Hebrew”, and features front and centre in a sans-serif, hand-drawn font.

Included in the design is a series of playful characters atop a tandem bicycle to represent the founders of the brewery and distillery, with the idea to invite prospective drinkers to “hop on” and join the shevet, which is Israeli slang for tribe.