Update 9/6/21: Ahead of this summer’s Euros, the full range of home and away kits have now been revealed.

Kit designs for all 24 countries participating in the delayed Euro 2020 tournament have been unveiled, drawing on a range of inspiration, from 1990s music videos to 19th century art movements.

The tournament was supposed to take place in 2020, but was postponed to this June because of the pandemic. Despite the date change, the event is still being styled as Euro 2020.

Nike, Adidas and Puma have designed the majority of the countries’ kits. We take a look at some of our favourite looks and also speak to Nike about the design process.

Nike has designed the kits for nine teams including England, Portugal and France. The latest designs incorporate the brand’s technology and focus on sustainability, while the visual cues are more retro — taking inspiration from the 1990s, for example.

Nike vice president of apparel Scott Munson tells Design Week that this year’s kits have created a bigger “toolbox for design”. He draws attention to the way that the new knitting technology allows for a multi-layered look, incorporating “hidden design elements” such as subtle patterns, and bolder imagery on top. Munson says that this has been especially useful in designing the England kits, and will allow Nike to explore this technology more in the future.

Sustainability is also a focus for Nike, Munson says, as the brand continues to strive for more environmentally-friendly production techniques. These kits are made from recycled polyester and it takes 12 plastic water bottles to make the shirt and shorts.

The design process for each kit involves various interest groups, from fans to influencers but most importantly the players. Using a “generative” design process, athletes’ data is input into a machine to work out the best kit design. This data includes “sweat maps”, “stretch maps” and “clip maps”. Athletes might need the fabric to breathe more in the centre chest area, but also stretch in the shoulder area, Munson says.

Munson says that the 2020 England kit is indicative of a more “inclusive” team (a sentiment echoed by England manager Gareth Southgate). “The big takeaway is that it’s a more modern and diverse England,” he says. Consultation with younger plays revealed that the 90s were an important reference point, and so the home jersey and its swoosh lock-up is inspired by the 1998 kit. Most noticeable is a lightning bolt-shape in a blue-and-red colourway on the side of the tops, which Munson says is evidence of the “premium” detailing. The away kit is inspired by the cult 1990 design — the never-worn “alternate” third kit that was styled by New Order’s Bernard Sumner in the video for World in Motion. 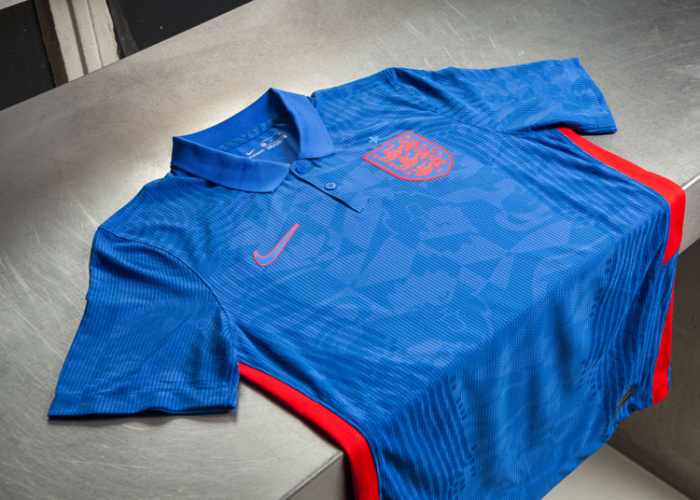 Munson calls the France kit typically “sophisticated” with a “classic design”. Featuring a stripe pattern in shades of blue — perhaps a nod to the country’s Breton tops — it shows that kits don’t need a “bold pattern” to make an impact. Its solo red stripe is a nod to a kit from the 1990s. Munson says that typography is important in conveying the “personality” of the football shirts, and France’s narrow font on the reverse aims to add to its elegant design.

The Portugal home shirt is a deep red, with a sleeve trim inspired by the country’s flag. With a polo collar, the design has a more formal look and is completed by the ornate badge design. Nike’s away kit is more casual and playful, using the flag colours in a stripe formation. 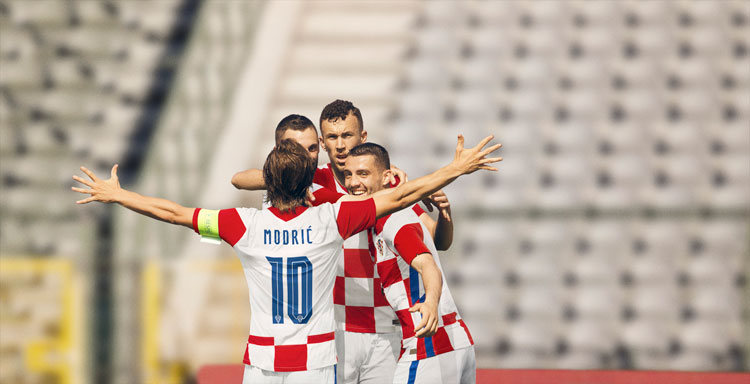 Nike’s home kit for Croatia features a bold red-and-white check pattern with blue side stripes, as a nod to the flag. Using the same shade of blue, the kit’s gothic-influenced typography is a neat complement to the chequered design.

Turkey’s home kit puts the country’s crescent and star at its centre, with a red chest band. The away kit is red all over, though with tonal variations at the side — evidence of Munson’s smaller design details. 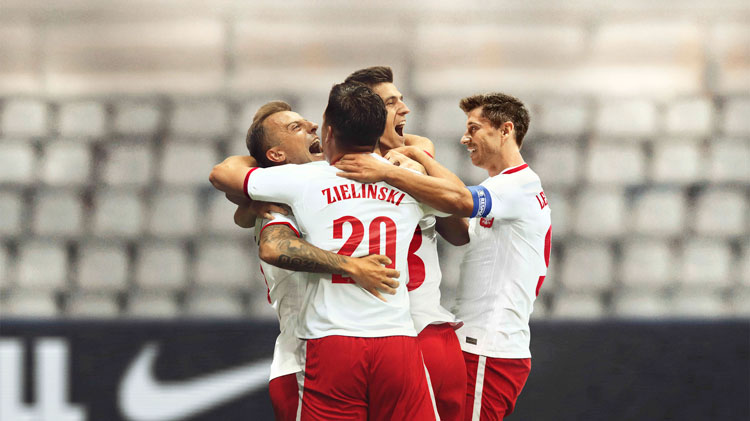 Poland has a red-and-white colour scheme though makes more use of the shirt’s collar and sleeves. The typography on the reverse seems to echo trends seen in this year’s Premier League kits, incorporating slashes.

The orange-and-black kit for the Netherlands features a web-like detailing on the home kits, which has a generative look. The away kit inverts the colour scheme and drops the subtle background detail.

Spain’s kits have been designed by Adidas and uses variations of a red tone to channel the country’s flag. The pattern is actually an original piece of art, and the brand hopes that it “refreshes” the national identity. “1920” has been embellished on the neck detail as a nod to the 100th anniversary of the country’s first federation football shirt and introduction of the lion crest.

Adidas’ home kit for Germany also uses a stripe pattern though they are thinner and handpainted, aiming for a “bespoke” appeal. It says that the clean, minimal look has been inspired by the country’s street style fashion. The country’s flag are the basis for the sleeve details, which seek to convey an idea of “togetherness and inclusivity” and feature a gold trim.

Adidas’ home kit for Hungary resembles Spain’s, but is inspired by the River Danube which flows through the country. The shades of red have been applied with a spray-paint effect to mimic the river’s waves and give the sense of floating. Green detailing at the collar is a nod to the national flag.

Puma’s home kit for Italy seeks to celebrate the country’s culture of art and is inspired by the Renaissance. The shirt features a detailed backing pattern with Italian flourishes.

Austria’s home shirt – designed by Puma – takes its red colour from hte country’s flag. The graphic pattern is inspired by 19th century art nouveau trends, originating from the Viennese Secession movement. A black and turquoise colourway has been used for the away kit.