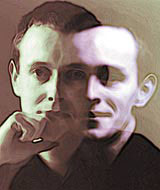 In today’s individualistic world it’s often extremely rare that young design groups succeed in staying together more than one year, but the blood tie that joins the brothers Bouroullec will be impossible to loosen.

In their case it’s much more than just a simple question of blood: the brothers’ complementary skills blend in a perfect and harmonic formula that finds its translation in a series of eclectic yet coherent products. Despite their genetic resemblance, the two discrete Bretons show slightly different competences in their approach – maybe also because of their five years’ difference – and like to change their roles according to the nature of the project they carry out, afraid of falling in the ‘routine trap’.

As Erwan Bouroullec says, ‘Sometimes it’s me who sets the structure and the material – the technical part of the project – and Ronan decides the way of using and interacting with it by reflecting on the sensations it delivers and by adding a magical portion of poetry. Sometimes the opposite happens, all in the most natural way.’

Erwan also says that their brotherly love very often ends up in daylong struggles for the sake of the ‘perfect product’, but, he continues, ‘that’s just part of the game’. The formula of the ‘perfect product’ often depends on the double dose of the same language, where the words ‘fluidity, humour, lack of contrasts, coherence, evolution, system, construction, micro-architecture, complexity and progress’ never miss and blend perfectly.

Despite the fact that they both look very shy, they don’t show the slightest sign of coyness in their plastic approach, the choice of the materials and the projects they accept.

Ronan, aged 30, started working in design in 1994, when he first developed the multifunctional Modular Kitchen, which Via (the French Industries of Furnishing) eventually produced in 1998. In 1997, he started to attract public attention with an exhibition at the gallery Neotu in Paris. He displayed eight white poly-propylene vases, which can be combined e e with each other to form larger vases and at the same time they ‘propose a way to fight against excessive consumption’.

Erwan started his design career one year later, when he presented his Lit Clos. Lit Clos is a high-tech adaptation of a traditional Breton rural ‘closed bed’, which was used in the past to protect the peasants from animal attacks as they slept. Like the traditional bed, Erwan’s design offers a private cocoon within the home environment, and considers today’s need to relax intellectually, as well as physically.

In 1999, the brothers decided to unite their talents and take up an extremely productive cooperation with influential and international manufacturers like Cappellini, Boffi, Ligne Roset, Authentics, Habitat and Sommer. Having experimented with the most advanced design materials and techniques, they felt the need to rediscover traditional materials that are a part of everyone’s memories and references.

Their fascination with china and its random production process forms the basis of their collaboration with French potter Martial QuÃ©rÃ© in Valloris. The shape of the carafe is unique and its function is immediately understood by the user. This is thanks to an almost invisible visual reference that stimulates our unconscious into remembering the forms of a traditional carafe. As Erwan says, ‘The idea is that of a transferable aesthetics, an aesthetic of a certain field that is naturally and spontaneously adapted by another. Our formal logic is similar to that of craftsmanship: we use primary forms and we put them out of their ordinary context.’

The Bouroullecs don’t believe the concept of ‘modernity’ in design is synonymous with new materials. Their fascination with more traditional materials has been confirmed recently by their monthly (two days each month) collaboration with the glass factory La Cirua in Marseille.

The simple and evolutionary forms and concepts of the objects created by the two brothers allow them to choose between different disciplines such as furniture, scenography (The MÃ©tropole Design Show at the Paris Furniture Fair 2001), jewellery (for Michael Young’s Smak range), interior design and e e soon the automotive industry and cosmetics.

As far as their only project in interiors is concerned, we can’t forget their Parisian A-POC store, the space where the visionary fashion designer Issey Miyake exposes the fruits of his latest passion: the translation of mass-production methods into garments (as clothes are directly woven and seamed in an almost infinite tube using a single thread). The organic space they have created is more than a simple boutique: the plastic metaphor of the assembly line process needed to produce the store calls upon the customers to complete the work.

Like their favourite designer Jasper Morrison, they want to stop building up analogies between the past and the future and want to concentrate on the added value of the objects they want to create. ‘An ideal object,’ says Erwan, ‘has to be the result of a minimum of two or three ideas. This rigorous process allows us to create archetypical objects with a memory of their own.’

One of the main peculiarities of the Bouroullecs is their capacity to reduce objects to their minimum (and not minimal) function and to mix them with sensory, but invisible details, thus giving them a ‘maximised global quality’ open to all varieties of interpretations.

In line with the concept of the ephemeral structure of Cabane de plage (beach hut), presented at the Villa Noailles in 2000, the brothers are currently working on a project of a prefabricated house in polystyrene for the Fashion International Festival 2002 in HyÃ¨res (material used for the scenography of French Shoes during the same festival in 2000).

The evident instantaneous beauty of the house will be highlighted by the extreme speed and building ease of the structure (its lightness will allow it to be built in only one day). The brothers want to create a new dimension to the general idea of buying and using a house, by using a material that is usually chosen for its functional characteristics in the packaging and insulating industry.

Another project the Bourellecs are currently working on is a new workstation for German manufacturer Vitra. The French brothers know that most of the products in their fields of competences are produced in countries such as Italy, Germany and Japan. That’s why they are open to offers coming from abroad. They don’t even have the time to think about what kind of project they would like to develop in the future and wonder who will be the next manufacturer to knock at their door.

As a hint for future partners, Erwan admits a passion for the microelectronic field and expresses his yet unfulfilled desire to be involved in the production of robots and electronic appliances.

The brothers don’t want to impose the rules of their ‘games’ and want to give people the freedom of interacting with their creations in the most instinctive and emotional way. They are against contemporary design advocating the de-materialisation of objects and believe that we will always need an affective approach to objects, either abstract or physical. And the brothers’ game is definitely not over yet.

Anna Bernagozzi is a design and trend consultant in Paris.

An exhibition of Ronan and Erwan Bouroullec’s work shows at the Design Museum, 28 Shad Thames, London SE1 from 1 February until 16 June