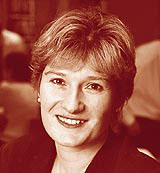 Willott Kingston Smith’s most recently published figures for the marketing services sector paint a picture of an industry enjoying high income levels at the tail end of the recent boom. Design groups are no exception.

We monitor an index for operating profit per head based on a 1985 index of 100. The index has nearly doubled to 194 and exceeds the increase in inflation over that period. This improved profitability results directly from increased revenue streams and productivity.

Unfortunately, this triumph may be short-lived. The most recent figures reflect the financial results at the tail end of the dotcom boom and generally high activity in the marketing services sector.

Since publishing these figures, design groups and indeed the marketing communications industry as a whole, have suffered a decline in fortune. Indeed, some design groups were beginning to feel a downturn in the market this time last year, which will be reflected in the next financial figures, published shortly.

So where are we now? From the early to middle part of last year, a chill wind began to blow. Revenue reduced for many design groups, leaving them with under-used, and in some cases overpaid, staff.

Generally, managers have reacted quickly and decisively to reduce costs as far as possible at an early stage. This has been painful and stressful, but has provided an opportunity for a much needed correction to an unduly high salary bill in some cases.

Thankfully, the sector’s balance sheet is reasonably strong. Few design groups have overcommitted themselves to shortor long-term borrowing. This is good, as it’s dangerous to be at risk to interest rate increases on sizeable borrowings when profits and revenue are falling. Those that have high borrowing tend to be part of larger groups. Their balance sheets were also fairly robust, so subsidiaries’ borrowings shouldn’t be an issue.

Those owned by some of the multinationals will, in many cases have had cuts imposed upon them. In most cases, this is to be welcomed, but for a few across-the-board cuts will not necessarily have been appropriate.

Design groups have probably done all they can to enable them to ride this dip in fortunes and would appear to be relatively well placed to take advantage of any improvement in the market.

Whether the market is improving is hard to judge. Talking to our clients, it would seem that there are a number of projects up for tender, but there is hot competition for these. When business is light, groups will sensibly reduce their minimum fee level. This in turn increases the number of consultancies chasing what business is out there. Smaller projects that used to provide a good infill are relatively rare. And it is harder to win work from clients that design groups haven’t previously worked with. There seems to be little sign of clients increasing the number of consultancies on their roster.

In times of uncertainty, everyone retreats into their shell, and clients are no exception. Unnecessary projects have been postponed and a number of contracts are being awarded on the basis of cost. This seems to be the case particularly for clients based outside London, who are looking to local design groups for cost-effective solutions.

Design groups are also being very careful not to overprice proposals. This is inevitably going to impact on margins. There is, however, work out there, as so much has been put off over the past six to 12 months that some has become a necessity now. In terms of who is getting that, design groups that have been marketing consistently tend to be doing better at new business than those that have recently initiated that process.

A straw poll among my clients indicated an anticipated improvement in the position mid-year. And although there are undoubtedly more opportunities arising now due to fierce competition, they are very hard to win.

In summary, design groups that have reacted swiftly to the downturn have reasonably strong balance sheets to live off. As the income line improves these businesses should be in a position to generate good margins off this new work, although the tendency to price down may be a worry.

My advice is to continue to contain costs within income levels and not fall into the trap of the last decade where salary costs spiralled out of control and significantly dented margins.

Amanda Merron is a partner at accountant Willott Kingston Smith

Wealth of knowledge is definitely there to be used