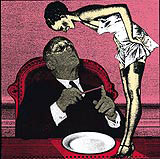 Trickett & Webb has designed a food-inspired calendar, printed in time for February by Augustus Martin, which arrives in a 12in pizza box and comes complete with greasy finger-prints on the reverse.

Illustrators including Peter Blake, Dan Fern and Lawrence Zeegen have collaborated with the designers on different months, such as a stars-and-stripes theme for January called American Hot, a chalk-board Lunchtime Special-inspired February, French Dressing by Andrzej Klimowski for March, green olives for August and a cartoon bucket alongside a dozen slang words for vomit for November.

All the illustrators are credited again on the inside back cover in fish-and-chip style wooden forks and on the back cover reads the word ‘gone’.