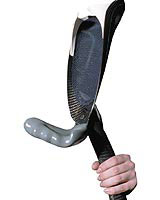 Design student Guy Robinson’s prototype for crutches goes on show at the Science Museum (31 January 2002). Robinson’s design, which offers greater support and manoeuvrability, appears as part of the Product of the Future awards, which is a collaboration between the museum, the National Endowment for Science, Technology and the Arts and the Royal College of Art.

Robinson’s futuristic design was prompted by his experience of having to use National Health Service crutches following a car accident. His crutches are made out of carbon fibre and include a spring-like material to cushion the impact at the start of each step. The shape of the stem allows objects and bags to be carried below the handle. The handle has been developed to distribute pressure evenly.

If you need ‘good brand police’, call the Bill