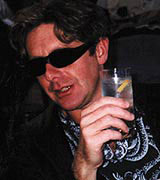 Exhibition designer Tim Pyne has been cleared of allegations of cronyism by the Fraud Squad surrounding his work for the Millennium Dome, after an investigation by PricewaterhouseCoopers and the police.

‘[New Millennium Experience Company’s] behaviour has been appalling, considering the effort involved in my work for the Dome,’ Pyne claims.