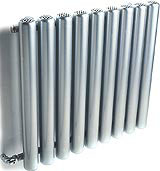 You don’t usually associate radiators with passion. But a meeting with Peter Peirse-Duncombe sets you off enthusing, not just for radiators, but for design.

As managing director of West Country-based Bisque Radiators, Peirse-Duncombe’s passion has helped to open up a market in the UK for radiators that are well designed interior features, sculptures almost, that complement the architecture. The company’s commitment to design has won it several creative prizes and, in November 2001, it added a coveted International Design Effectiveness Award to its trophy cupboard – for Hot Spring, which was designed by Paul Priestman of Priestman Goode.

Bisque is best known in design for its longstanding collaboration with Priestman. The association began in the early 1990s when Priestman approached Bisque founder Geoffrey Ward with his idea for the Cactus radiator. Ward, a plumber, was hooked and Cactus went into production, though only briefly, with sales of fewer than 100 units, possibly because at that time plumbers’ merchants were reluctant to stock ‘designer’ products. Though its life was short, the model managed to win a Design Week Award in 1993.

Undaunted by the demise of Cactus, Ward asked Priestman to look at the idea of a coiled radiator and Hot Spring was born. Then this year Priestman’s latest design, Hot Hoop, was launched at London’s contemporary furniture show 100% Design.

Peirse-Duncombe admits he was sceptical of Hot Spring at the outset. ‘I saw it as wonderful editorial,’ he says. ‘But as a businessman I believed it wouldn’t pay – and it did’.

Taking calculated risks has been part of Bisque’s culture from the outset in the mid-1980s, when Ward turned his company Virgin Plumbers into a radiator importer, focusing on contemporary designs largely from Germany and Switzerland. He brought in architectural illustrator Paul Draper, now Bisque chairman, at that point. The turning point came in 1989, when Swiss radiator giant Arbonia Forster Group appointed the company as its UK representative.

Peirse-Duncombe’s career with Bisque dates back to 1990, when he was brought in to build the distribution side of the business. A mining engineer by background, he had an MBA from London Business School and had been working on technology transfer for Avon Rubber in Wiltshire. He took over as managing director in 1997, when Ward became very ill. Ward sadly died in 1999, when Draper became chairman.

Though Bisque’s name has been made in the UK on the strength of design, it doesn’t commission much work out. Apart from Priestman’s products, it prefers still to import well-designed radiators and simply distribute them here. ‘It’s easier if someone else has done all the work,’ says Peirse-Duncombe. Even the company’s branding, graphics and exhibition designs are handled in-house by Draper.

The deal with Priestman Goode is royalty-based. For Hot Hoop, the London consultancy paid the costs up to prototype stage then it and Bisque split the design registration fees 50/50. Priestman Goode then receives ‘a good royalty’ on the net price. Priestman Goode retains the rights to the product, while Bisque has an exclusive licence for five years.

The relationship thrives on mutual interest, invariably with new radiator designs. ‘We asked Priestman to redesign a bracket configuration once [for another company’s radiator], but that is not really his call,’ says Peirse-Duncombe.

He explains that while Bisque hasn’t used design groups other than Priestman Goode on the new-product side, it is now working with Italian designer/ manufacturer TalinDori on the forthcoming Zanzibar range.

With just over £10m turnover, a Bath headquarters, a separate Bath commercial office and a London showroom, Bisque is now organised as two separate companies, Bisque (Retail) and Bisque (Commercial). It has consolidated its position and made a great breakthrough with hitherto conservative plumbers’ merchants, which are now keen to stock Priestman Goode’s products.

Bisque has managed to succeed largely through educating potential stockists by creating a demand. ‘Twelve years ago there was no demand for the product. Architects and designers loved it, but plumbers didn’t. We used the design of ads and exhibition stands to empower the end-users to say ‘I want this’,’ says Peirse-Duncombe.

With the need ‘to have something new and exciting every year’, according to Peirse-Duncombe, the relationship with Priestman Goode seems secure. ‘The potential for growth is huge,’ Peirse-Duncombe concludes.