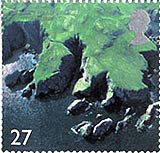 Britain’s 7000 mile-long coastline is the subject of the Royal Mail’s forthcoming stamp set, which will be issued on 19 March. Aerial photography by Richard Cooke captures ten diverse shorelines, including the tiny fishing port of Padstow in Cornwall, the white cliffs of Dover, St Abb’s Head in Scotland’s Outer Hebrides and sunbathers and surfers on Newquay Beach in Cornwall.

Cooke spent several months shooting the coastlines of the entire British Isles from a helicopter. Rose Design has created the presentation pack, which contains the full set of first-class stamps, and its cover.